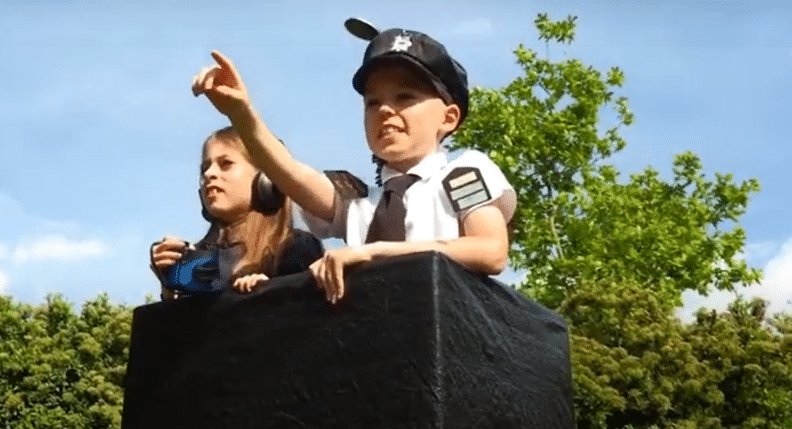 Video ad tech company Unruly has conducted a new study into the fan-created ads for ITV’s ‘The People’s Ad Break’, comparing them with the original ads to see how effective they were in terms of emotional engagement and brand recall.

The results showed that– even with just a few props from home and a humble mobile phone – two of the remakes generated more intense levels of positivity than the original classic commercials.

The broadcaster invited the public to recreate five much-loved commercials from Aldi, Haribo, Honda, Walkers and Weetabix for its initiative, with the best remakes aired during Britain’s Got Talent on Saturday (May 23).

To see how the public’s remakes compared with the original creatives, video ad tech company Unruly used its emotional testing and targeting tool, UnrulyEQ, to measure the emotional and brand impact of both sets of videos.

The result showed that – even with just a few props from home and a humble mobile phone – two of the remakes generated more intense levels of positivity than the original classic commercials. Honda’s famous “Cog” commercial, which features a chain reaction of car parts that culminates in a finished Honda Accord, wowed the public when it first came out in 2003. But while it left 20% of viewers feeling intense positive emotions, the 2020 homemade version – featuring coveted lockdown item the loo roll and plenty of giggling – left 30% with the same intense levels of positivity.

The remake’s EQ Score – a composite Unruly score out of 10 based on a campaign’s effectiveness and ability to not only engage consumers but also drive brand metrics such as brand favorability and purchase intent – was also higher than the original.

Similarly, Aldi’s “Tea”, featuring a gin-loving grandmother, may have had viewers chuckling into their cups of tea (and glasses of spirits) in 2011, but the 2020 public remake for The People’s Ad Break, featuring a lovable pooch comparing dog foods in the lead role, made 22.3% of viewers feel intensely positive, slightly more than the 21.8% managed by the original.

Of the others, the resounding message is: probably best to leave it to the professionals. 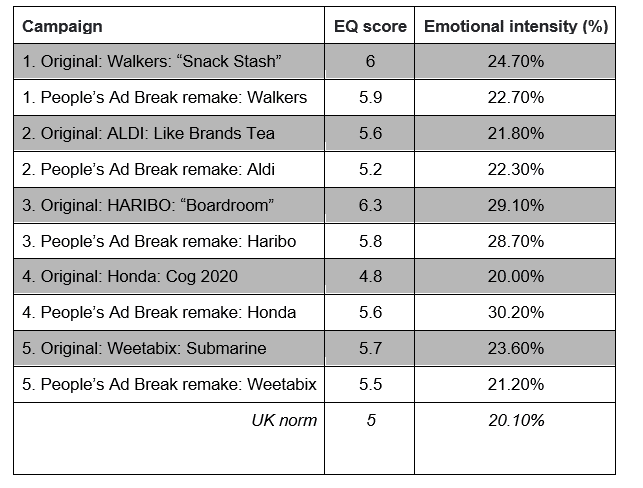 Rebecca Waring, Unruly’s Global VP, Insight & Solutions, said: “The People’s Ad Break was such a fun way to engage people with advertising and keep families occupied during lockdown, and we were really impressed to see the levels of engagement the People’s Ads generated, just using props from around the home.

“These results show that ads featuring people are much more engaging if they have professional actors – it’s difficult for amateurs to elicit the same level of emotional response, especially when it comes to humour. The big shock was that viewers found the stunt in the Honda remake significantly more amazing (+70%) and surprising (+89%) than the original, because it was executed at home with such humble props and no signs of editing. The giggling and cheering in the background also helped to create a sense of warmth and happiness that wasn’t present in the original.

“While the Aldi remake managed to more than match the overall emotional intensity of the original, it was much less funny (-55%). The cute dog compensated for this by evoking happiness instead (+30%).”

Interestingly, Unruly’s research also found that brand recall among all of the remakes was higher than the originals. 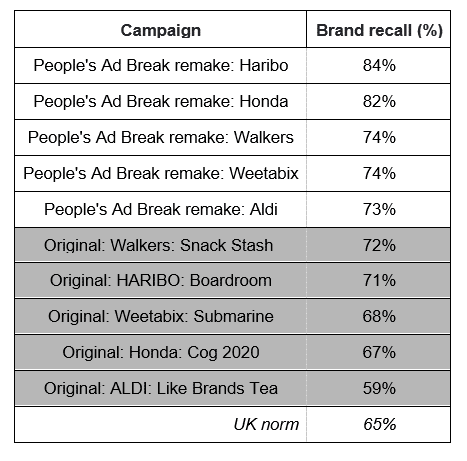 Waring added: “All the remakes performed really well for brand recall. For example, in the Haribo remake it seems to have made a big difference that the woman was holding the bag up clearly to the camera at the centre of the screen in the first scene. For Honda, the homemade sign at the end coincided with the peak in emotion as they celebrated the stunt – our research shows that this is an excellent way to make the brand more memorable. While in the Aldi remake there is less confusion around branding – in the original, a significant number of viewers misattributed the ad to PG Tips.

“However, purchase intent and intent to find out more was generally better in the originals. This is partly due to the viewers understanding that the remakes are intended as a bit of fun rather than a real ad. But the lower quality feel of the videos, along with less compelling messaging (knowledge was on average 9% lower), most likely made the products seem less appealing.”

Unruly analysed the emotional responses of almost 2,076 UK consumers to 5 classic commercials and their remakes, aired during ITV’s The People’s Ad Break on Saturday, May 23 using its content measurement tool, UnrulyEQ. The results from the original ads were then compared with the public remakes’ results and Unruly’s database of thousands of ads. Each emotion is scored out of 10, with responses that score 9-10 considered ‘intense’.