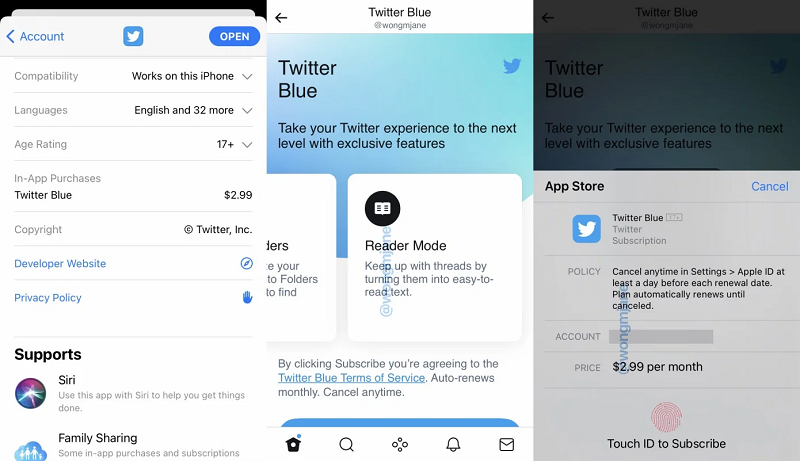 Twitter is planning a new subscription service which has started being listed on app stores, in an indication that the social media giant is preparing to trial the offering soon.

Although “Twitter Blue” is now listed on app stores, it isn’t yet fully enabled for users.

“Twitter Blue” is listed as an in-app purchase, priced at £2.49 in the UK and $2.99 in the US.
Twitter has given no further details, and declined to confirm online claims that the service could allow users to “undo” tweets.

It previously said it was working on special features for paid subscribers.

Pilot offerings of the subscription service are likely to start soon although it is unclear which countries it will be available in first.

The firm also plans to continue developing and experimenting with other ways to diversify its revenues beyond advertising this year and further ahead.

These plans could also include subscription services and other ways to offer individuals and businesses access to special features on the platform.

Twitter has also made clear that it will continue to focus on growing its advertising business.

Last month, the company launched a new “tip jar” feature that allowed people to send money to others on the social network.

Twitter said the feature was “an easy way to support the incredible voices that make up the conversation”.

To begin with, only a select group of people can receive tips – a group Twitter said was made up of “creators”, journalists, experts, and non-profits.

The function adds a small icon to a user’s profile – on mobile devices only for now – with a drop-down menu for other payment providers such as PayPal, Venmo, or the Cash App, the latter two of which are popular in the United States.

Yuval Ben-Itzhak, President of social media marketing firm Socialbakers, said the move is a sign that Twitter is diversifying its revenue streams beyond advertising, in the hunt for ‘revenue durability’ – but questions whether this will help with user growth or engagement.

“As we heard when Twitter reported strong Q1 earnings in April, the platform is looking into ways to increase their “revenue durability” and diversify their revenue streams beyond advertising,” said Ben-Itzhak. “Twitter has made clear it will still continue to focus on growing its advertising business, but the launch of its ‘Blue’ subscription service, while little is known about the actual offering of the service, is a sure sign they’re giving themselves as many options as possible to secure revenues going forward.

“Twitter Blue, as well as Twitter Tip, are both great options to monetize the existing user base. However, these important initiatives will likely not help Twitter to attract new users and increase overall engagement on the platform. The competition for eyeballs remains stiff. The other social platforms are constantly introducing new content experiences and technologies that make more people sign up. Twitter needs to make sure that it remains focused on attracting new users and keeping engagement high, if it wants to grow further and thrive.”