What would happen if the internet shut down for 1 hour? 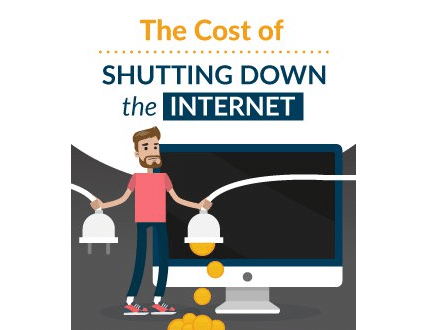 Which countries would lose the most money if someone actually broke the internet? This new report from Website Builder Expert (WBE) finds that China would suffer the most.

WBE’s study compares the most recent data on the 22 biggest countries with a substantial e-commerce presence, with eMarketer statistics to determine how much money each of the countries would lose in online sales if the internet were to cut out for an hour.

This study is the first to show the actual financial implications of an internet blackout country by country.

Top findings from the research:

One threat to the internet that has recently come to light is cable cutting. 99% of global information is transmitted through fiber optic cables which span 700,000 miles around the world and are integral to the world’s economy.

The internet has now become an integral part of most people’s daily lives, but it is as at risk of shutting down as any physical network. One threat that has recently come to light is cable cutting. 99% of global information is transmitted through fiber optic cables which span 700,000 miles around the world and are integral to the world’s economy. Should one of these be sabotaged with deep sea grappling hooks – as has been suggested by some military experts, this study is the first to show the actual financial implications of an internet blackout country by country.

China accounts for more than a fifth of the world’s internet users. Not only would a break in internet connection have a catastrophic effect on e-commerce but the country, like so many others who now largely depend on the internet to function, would likely be at a stand still.

The UK came in third place in the study, set to lose over $15 million in e-commerce sales with every hour of the internet being unavailable. This is the highest of all the European countries in the study and millions more than e-commerce giants Japan, Germany and India.

Interestingly, Denmark has one of the lowest e-commerce losses of all the countries in the study, coming in second to last position. However, the e-commerce freeze would actually hit the country hard in terms of impact on GDP, with the region coming third highest in terms of this financial deficit.

Alex English, who headed up this research for Website Builder Expert comments: “Whether it’s cable cutting, cyber-warfare or space junk interfering with satellites, the risk of potentially losing internet connection is real. It was surprising to see just how immense China’s losses would be compared to its peers; theres a gap of over $100 million between China in first place and the US in second place, which is indicative of the kind of money China’s biggest e-commerce site, Alibaba, is generating. Though Amazon is fast establishing a monopoly on e-commerce in the western world, this research shows that an internet blackout in Asia could be far more costly.”