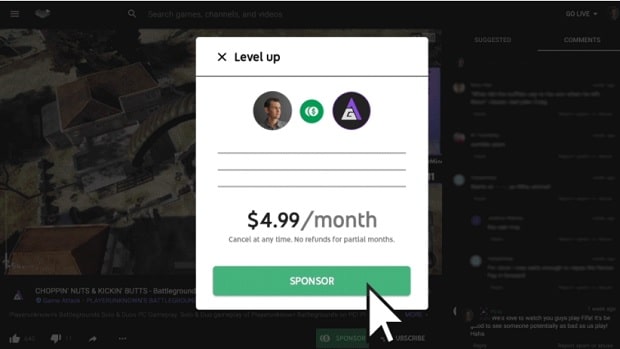 YouTube has axed its paid channels initiative, replacing it with an expanded sponsorship model available to all YouTube Gaming creators.

YouTube first introduced paid channels in 2013 as its very first move into the subscription business.

Initially launched with a few dozen content partners including the Sesame Workshop, NatGeo Kids and DHX Media, paid channels allowed creators to set their own price for subscriber-only channels on the service.

However, the initiative has since been overshadowed by YouTube’s other monetisation options, including the site-wide YouTube Red subscription service. Currenlty, less than 1% of creators were making use of paid channels, according to YouTube.

YouTube is now rolling out paid sponsorships to its gaming content creators. Under this scheme, users can sponsor a creator for $4.99 a month, and in return get custom chat badges and custom emoji as well as access to a sponsor-only chat. Creators can even give them additional perks through third-party integrations.

YouTube product manager Barbara Macdonald said in a blog post Tuesday that sponsorships have been a huge boon for some of the creators who were part of the test phase: “Rocket Beans earned 1,500 sponsors in their first day. And ONE_shot_GURL’s monthly celebratory wall of sponsors is getting so full, it’s running out of room.”

If all goes well, these kinds of sponsorships may one day also be available to all of YouTube’s creators. The video service is starting to test it with a small group of creators within the main YouTube app now, also offering them the chance to sell sponsorships for $4.99 a month.