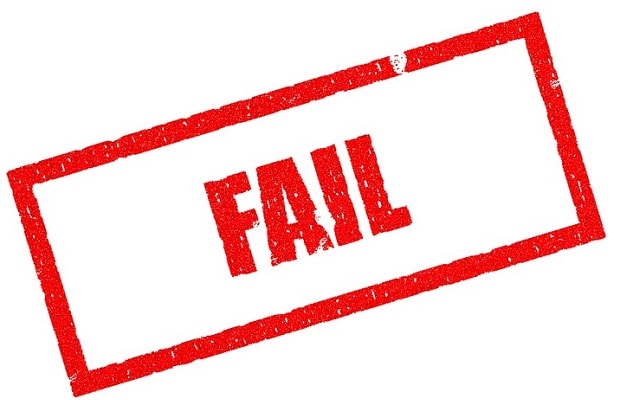 As 2019 draws to a close, we look at some of the biggest marketing blunders of the year. From the US military threatening to bomb alien hunters to lethal conker recipes, there were plenty of mistakes from companies that should know better. Read on, learn from the mistakes and hope your team doesn’t make the list in 2020…

US Military apologises for ‘bomb threat’ to alien hunters In September, the US military had to apologise for sending a tweet that appeared to threaten people visiting Area 51 after a Facebook event went viral. The message, posted by the Defence Visual Information Distribution Service, communications service for the US military, said: “The last thing #Millennials will see if they attempt the #area51raid today”. Accompanying the tweet was an image of a stealth bomber and 200 airmen taken in Missouri, seemingly threatening attendees at Area 51 with military action. The tweet was later deleted, and the service apologised, saying: “Last night a DVIDSHUB employee posted a Tweet that in NO WAY supports the stance of the Department of Defence. It was inappropriate and we apologise for this mistake.” It came after fears that alien hunters could attempt to “storm” Area 51, which conspiring theorists claim holds evidence of extraterrestrials. The Area 51 event started on Facebook in July, and encouraged people to visit the mysterious site to “see them aliens”. More than half a million people had signed up to the event before it was taken down from the site. The event was likely a joke, and encouraged attendees to “naruto run” to “move faster than their bullets”. In July, Google was left red-faced after it was found to be reviewing and transcribing recordings from Google Home smart speakers and Google Assistant virtual assistant. Belgian public broadcaster VRT revealed a Google contractor had shared recordings the company had made via these devices. 153 were “conversations that should never have been recorded” because the wake phrase of “OK Google” was not given. These unintentionally recorded exchanges included blazing rows, bedroom chatter, parents talking to their children and phone calls exposing confidential information. VRT journalist Tim Verheyden said he had received thousands of these recordings, many of which had been captured by accident after the assistant had misheard its wake word. Exercise bike and VR fitness company Peloton faced a backlash over a “sexist” Christmas advert. The ad featured a man presenting his wife with the stationary bike on Christmas morning, then recording her workouts over a year and sharing them with him through a video blog. The advert has received backlash online, with some calling it “sexist” and saying it could be construed as a man pressuring the slim woman in the advert to exercise. A Peloton spokesperson said: “While we’re disappointed in how some have misinterpreted this commercial, we are encouraged by – and grateful for – the outpouring of support we’ve received from those who understand what we were trying to communicate.” In May, online retailer Zavvi received hundreds of complaints from contestants who were mistakenly told they had won VIP tickets to European football’s biggest final. The firm sent emails to numerous subscribers telling them they each won Champions League Final tickets. Zavvi apologised on Twitter for the incident, putting it down to a “some technical issues”, but later deleted the tweet. The email said each person had won flights, hotel stay at a 4* hotel, £250 to spend and tickets to the game. One user commented that they had not even entered the competition but received the email congratulating them on winning. People responded to the apology angrily, saying the mistake was “disheartening” and that the brand had “managed to upset all customers”. In the summer, Arsenal’s Adidas kit launch was hijacked by racist social media users. The football club’s new kit makers let fans to put their own Twitter handles on the back of a virtual shirt, which was then tweeted out from the @adidasUK account. The sportswear brand has united with the London football club for the first time in 25 years, and was attempting to generate excitement through an interactive publicity stunt. Anyone who used the hashtag #DareToCreate automatically received a reply from Adidas UK’s account featuring their Twitter handle on the back of an Arsenal shirt. But images of Arsenal kits referencing Adolf Hitler, Madeleine McCann and the Hillsborough disaster were subsequently shared when Twitter users realised the artificial intelligence tool did not filter out offensive usernames. The images were accompanied by a link inviting the user to buy the personalised shirt. The campaign was described by one observer as a “marketing catastrophe” as many of the posts were widely retweeted for several hours before were deleted. In October, Innocent Drinks was forced to tweet a series of warning messages after it sent out a joke message about Conker smoothies- a concoction that could kill people if consumed. The Coca Cola-owned drinks brand, known for smoothies, “released” a new conker milk drink for autumn. Tweeting last week, Innocent introduced this new dairy-free drink with the hashtag #conkermilk and the resulting backlash was swift. It tweeted: “Why not make a fake dairy free drink as a joke? Something weird and ridiculous that no one would want to drink, to get people talking? It was genius.” Many people assumed this was a real product, but in fact, eating conkers can be dangerous. Innocent had to issue a series of clarifying tweets reminding the public to neither eat nor milk conkers. During the hotly contested EU parliament election in the Spring, a tweet posted by Burger King was banned for encouraging violence and anti-social behaviour. During the European elections, a man hurled a milkshake at Brexit Party leader Nigel Farage while he campaigned in Newcastle. Following the incident, a McDonald’s branch in Edinburgh announced it would not be selling milkshakes while a nearby political rally addressed by Farage took place nearby. Burger King, however, took a different approach and responded by tweeting: “Dear people of Scotland. We’re selling milkshakes all weekend. Have fun. Love BK. #justsaying”. The tweet, which was retweeted more than 14,900 times, garnered 24 complaints from people who thought it encouraged violence and anti-social behaviour. In response to the complaints, Burger King stressed that the tweet was intended to be tongue in cheek and insisted that it does not endorse violence, which it clarified in a follow-up tweet. “We’d never endorse violence – or wasting our delicious milkshakes!” the tweet read. “So enjoy the weekend and please drink responsibly people.” An assessment conducted by the Advertising Standards Authority (ASA) has concluded that given how widely reported the Farage milkshake incident was, those reading Burger King’s tweet were likely to be aware that the politician was due to appear in Scotland that weekend and view it as a reference to recent incidents of “milkshaking” political figures.

IBM under fire for using Flickr photos for facial-recognition project Back in March, IBM was accused of using Flickr photos for a facial-recognition project, without the permission of people in the images. The company extracted nearly one million photos from a dataset of Flickr images originally compiled by Yahoo. But many people pictured were probably unaware of how their data had been used, according to an NBC News report. IBM said in a statement that it had taken great care to comply with privacy principles. But some of the photographers whose images were included in IBM’s dataset were surprised when NBC News told them that their photographs had been annotated with details including facial geometry and skin tone and may be used to develop facial recognition algorithms. Despite IBM’s assurances that Flickr users can opt out of the database, NBC News discovered that it’s almost impossible to get photos removed. Sausage maker Heck faced a grilling on social media, after they hosted Boris Johnson and created a special ‘Boris Banger’ in his honour. During the hustings tour of the area, then UK Prime Minister candidate Johnson was invited into their factory at Bedale and given a demonstration of sausage making with Boris Bangers top of the menu. Johnson said he was “insanely proud” to have a banger named after him. But the publicity has caused a social media storm with protests trending on twitter about Heck. One protester one social media wrote: “Are you off your trolley that is you off my shopping list.” The company said they would not be selling any of the special sausages and moved to allay criticism saying they had invited both Tory hopefuls into the factory. However, some on social media pointed out that the brand didn’t make a ‘Jeremy Hunt banger’ for Boris’ rival.