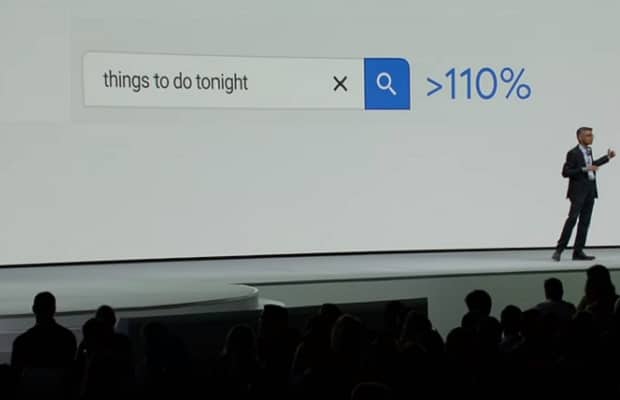 Google has launched a suite of ad-buying tools that will let machines instead of humans fine-tune ads and determine where they should run.

The company unveiled the new products Tuesday at its Google Marketing Live show, including what it said is the biggest change to how search ads are made since AdWords debuted 18 years ago.

Rather than manually developing, testing and optimizing text ads for search, so-called Responsive search ads will use machine learning to immediately determine the best-performing combination among 15 headlines and four description lines supplied by the advertiser.

It will continuously optimise based on what appears to be most relevant to the user.

For example, if two people both searched for “best air purifier,” they might see different creative based on signals used in bidding, such as device type. Google claims machine-learning creative optimization can increase clicks by 15%.

Google said its machine learning now can predict when to show ads so that given a certain budget, it can maximize foot traffic to stores or favourable consumer sentiment of a brand.

It also announced broader availability of a tool that automatically chooses the best text for ads in Google search results from an advertiser-created list of up to 19 phrases.

Users making the same query might see different versions of an ad “based on context,” the company said in a blog post on 10 July as it opens its annual conference for advertisers.

Advertisers have welcomed the advanced software, which could encourage them to spend more on Google as it makes more efficient use of their money. But consumer privacy and technology analysts are watching the shift with concern and a push for more regulatory scrutiny may be coming.

In Europe, the month-old General Data Protection Regulation requires end users to consent to being the subject of some forms of automated decision making. The rule also requires transparency about data involved and an effort to prevent bias, though what is covered is likely to be litigated.

Other tools launched at the event are listed below:

The new ‘Maximize Lift’ product offers a bidding strategy to marketers who want to drive higher brand lift on YouTube instead of other KPIs, such as conversions or view-through rate. With an assist from machine learning, Maximize lift tweaks marketers’ video-ad bids in real time to improve lift in awareness, ad recall, consideration and favourability. The tool is in beta and will launch globally later this year.

Now Local campaigns apply machine learning to a business’s location and creative to enhance ads to drive customers into stores. Marketers using Google’s Smart Shopping campaigns, which was introduced earlier this year, will now be able to also use the tool to optimise for two additional business goals: store visits and new customers. Within a few weeks, marketers will be able to create and manage Smart Shopping campaigns directly from Shopify.

Responsive ads and Local campaigns will be available within the next several months.

Businesses using Google Ads can now gauge how fast or slow their landing pages load on mobile devices. The scores will be use a 10-point scale based on several factors, such as the relationship between page speed and conversion rate. The data will be updated daily so businesses can track how landing page optimizations are working over time.

The reports will combine data from people who visit a site multiple times using different devices so businesses can get a consolidated look at how users behave on their sites, regardless of the device they’re using. Reports will only display aggregated data from users who have agreed to share it; individual user data will not be shared.

The additional campaign type allows travel and hotel advertisers to use machine learning to maximize bookings.