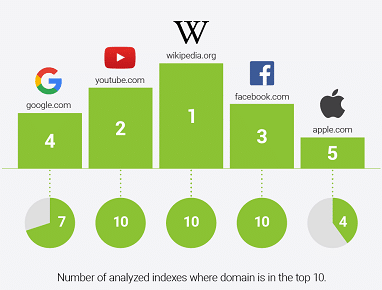 Wikipedia.org is the most visible website in Google search results across ten countries, including the United States, the UK, Germany and France according to new research.

The Searchmetrics study indicate that the second and third most visible sites are youtube.com and facebook.com, while twitter.com’s visibility has declined globally.

The findings come from Searchmetrics‘ SEO World Rankings study which analyzed search results from ten national Google indexes around the globe to come up with the top ten performers in organic search in each country during 2017.

The study also identified an overall list of the five ‘Global Champions’, those five sites that are most visible across national boundaries: 1) wikipedia.org; 2) youtube.com ; 3) facebook.com; 4) google.com; and 5) apple.com.

To create the list of the top ten most visible websites in each country, Searchmetrics took an average of several data points taken throughout the year.

To work out the five ‘Global Champion’ sites that are most visible across national boundaries, Searchmetrics analyzed the number of countries where the domain ranks in the top ten in terms of SEO visibility, then sorted by no of 1st places, no of 2nd places, no of 3rd places etc.