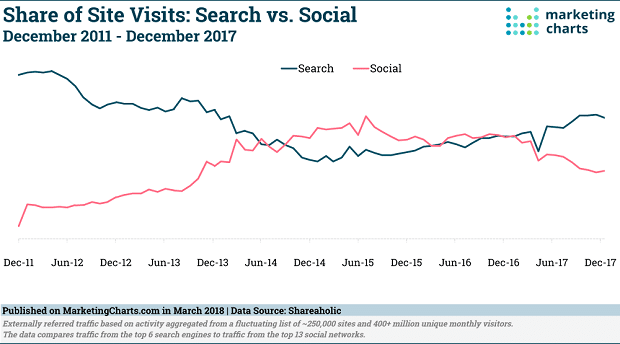 Search has regained its lead over social in 2017 for referral traffic, regaining its top spot for the first time since 2013, according to new research.

The study, from Shareaholic, also shows that Google has regained its lead from Facebook as the top referral traffic driver in 2017 as the search giant focussed on mobile.

According to the report, Google now accounts for twice the share of referral traffic to leading media websites as Facebook.

The Shareaholic platform tracks over 400 million users visiting its network of over 250,000 mobile and desktop sites.

The report found that search engines are indexing more social content, not just considering it for ranking purposes, but including it directly in search results. Users thus do not have to depend on search features in social networks and can continue to rely on their favorite search engine.

The top search engine in terms of share of visits is of course Google, which ended up accounting for more than 97% of search-referred visits during the second half of 2017, per Shareaholic’s data. 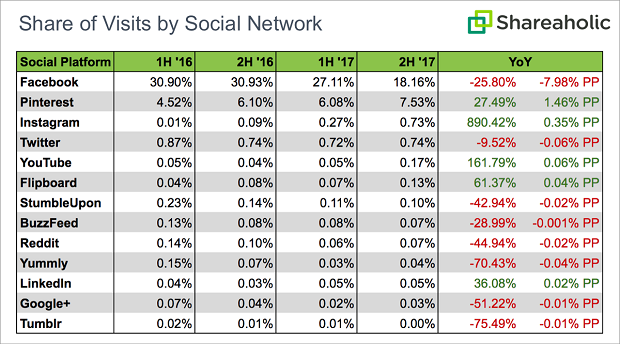 By contrast, the leading social platform – Facebook – saw a rather large decrease in its contributed share of visits. By the second half of 2017, it accounted for just 18.2%, down from 30.9% a year earlier.

Shareaholic predicts search will be the largest traffic driver in 2018. The company also points out that the lack of fragmentation in the space “makes the return on your efforts even more apparent as you only need to focus on one or two platforms.”

Shareaholic’s report is based on externally referred traffic from 400+ million users to more than 250,000 mobile and desktop sites that use its content marketing and publishing tools. These sites encompass a variety of categories – such as food, tech, and marketing – and range from independent blogs to publishing companies and commerce sites of various sizes.