The study, from eMarketer, found that widespread lockdowns across the UK last year drove people to social media, leading many new users to TikTok in the process.
Aside from the organic growth, TikTok expanded its operations in the UK which hopes to establish itself as a global tech hub post-Brexit. Last year, the short-form video app grew 75.2% to 9.8 million UK users.

“The pandemic drove the huge surge in users,” said Bill Fisher, eMarketer senior analyst at Insider Intelligence. “But the challenge will be retaining those users as society reopens. The signs are good, though. Key to the platform’s success has been the effectiveness of its ‘For You’ algorithm. Other platforms have struggled to compete in this regard, while TikTok continues to serve addictive and relevant content that has kept users engaged. This, along with early mover advantage, allowed TikTok to attract some big-name content creators to the platform. As a marketer proposition, though, it will need to continue engaging audiences beyond its core demographics—not so easy, as people in the UK become slightly less wedded to their devices post-pandemic.” 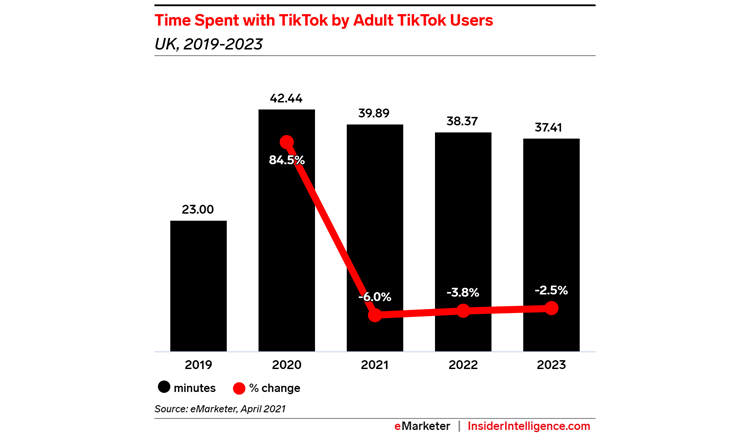 Time spent on TikTok among adult users nearly doubled last year to slightly more than 42 minutes per day on average. However, in the coming years, that figure will slowly decline to just over 37 minutes per day by 2023.

eMarketer’s forecasts and estimates are based on an analysis of quantitative and qualitative data from research firms, government agencies, media firms, and public companies, plus interviews with top executives at publishers, ad buyers, and agencies. Data is weighted based on methodology and soundness. Each eMarketer forecast fits within the larger matrix of all its forecasts, with the same assumptions and general framework used to project figures in a wide variety of areas. Regular reevaluation of available data means the forecasts reflect the latest business developments, technology trends, and economic changes.