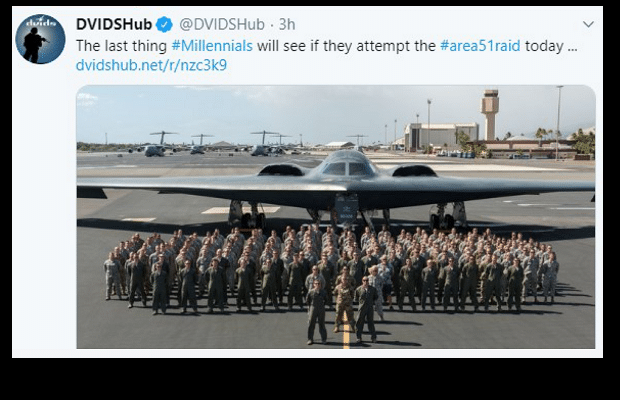 The US military has apologised for sending a tweet that appeared to threaten people visiting Area 51 over the weekend after a Facebook event went viral.

The message, posted by the Defence Visual Information Distribution Service, communications service for the US military, said: “The last thing #Millennials will see if they attempt the #area51raid today”.

Accompanying the tweet was an image of a stealth bomber and 200 airmen taken in Missouri, seemingly threatening attendees at Area 51 with military action.

The tweet was later deleted, and the service apologised, saying: “Last night a DVIDSHUB employee posted a Tweet that in NO WAY supports the stance of the Department of Defence. It was inappropriate and we apologise for this mistake.”

It came after fears that alien hunters could attempt to “storm” Area 51, which conspiring theorists claim holds evidence of extraterrestrials.

The Area 51 event started on Facebook in July, and encouraged people to visit the mysterious site to “see them aliens”.

More than half a million people had signed up to the event before it was taken down from the site.

The event was likely a joke, and encouraged attendees to “naruto run” to “move faster than their bullets”.

Naruto run is the unique running style of Naruto Uzumaki, the star of the Japanese anime series Naruto who sprints with his arms stretched behind him.

However, despite the event being deleted on Facebook, thousands of people turned up in the town of Rachel in Nevada, close to the secretive site, to take part in the Alienstock festival at a local extra-terrestrial-themed hotel.

Over the weekend, police estimated that around 3,000 people had visited the area, driven by the original Facebook event, with some even getting as close as the gates to the military base.

Event-goers largely left in peace, with authorities reporting that only a handful of arrests were made at the gates of Area 51.

The site is the subject of conspiracy theories surrounding alien life and technology, somewhat fuelled by the secrecy surrounding the Nevada base.

A former-staff member in the 1980s once claimed that the government was hiding alien technology at the base, and that it was being reverse-engineered for military use.

Despite the countless theories, the US government’s official line is that what happens at Area 51 is classified for the purpose of national security and only acknowledged its existence in 2013.

When details of the weekend’s event emerged, the US military warned potential UFO-seekers not to try and get into the site, which is heavily guarded and under 24-hour security.