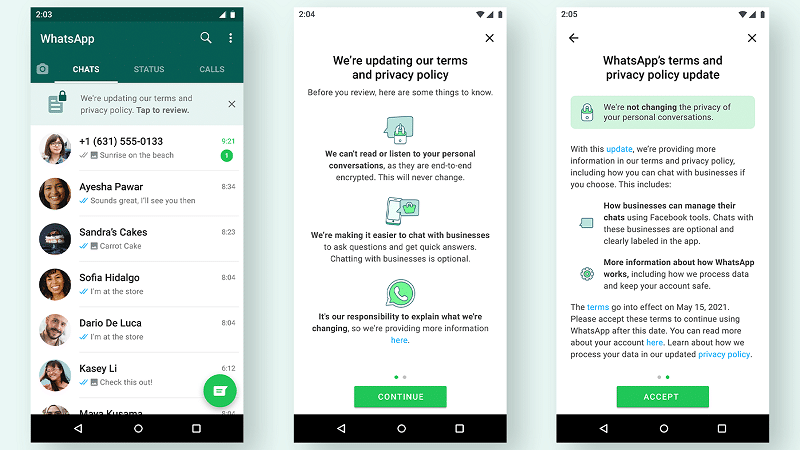 WhatsApp is making a second attempt to get its users to accept an updated privacy policy after the initial effort in January sent many people to rival messaging apps.

The Facebook-owned chat app says the update will allow people to chat to businesses, as it seeks to monetise the platform without resorting to traditional ads.

WhatsApp will try for a second time to roll out the update in mid-May. In an effort to smooth the transition, WhatsApp will for the first time allow limited access to its services for users who do not agree to the new terms of service.

From 15 May, those users will no longer be able to send or read messages but will continue to be able to receive calls and notifications for a “short time”.

Eventually, those users will be cut off unless they accept the new terms. In the first three weeks of this year when WhatsApp initially attempted to change its terms, its competitors Signal and Telegram gained more than 30 million users between them.

Outcry in January about the perceived changes on Facebook’s access to data scuppered the company’s first attempt to move WhatsApp users into a new privacy agreement.

The company stressed that the update was not about changing data-sharing practices with Facebook – which owns WhatsApp – but was instead just a matter of enabling users to talk to businesses within the app.

Turning the messaging app into a platform for businesses – as a channel for customer services, as well as a payment and shopping platform – has been a focus for Facebook for many years.

But the policy update designed to introduce these features instead provoked privacy concerns, partially due to the deadline of 8 February by which users would have to agree or find themselves unable to use the app.

It was also partially spurred on by alternative apps pitching for WhatsApp’s user base, with allegations that the update would leave those users sharing more data with Facebook as a result.

Many suggested users would migrate to other platforms, and rival app Signal surged up the app charts on both iOS and Android as concerns about WhatsApp’s plans circulated.

WhatsApp paused the launch after it “encountered a great deal of misinformation about this update” forcing it to “work hard to clear up any confusion”.

In a new blog post referencing the outcry, the company has explained that it will be attempting to get users to sign the new privacy agreement with a more gentle approach over the next few weeks, while providing more information.

“As a reminder, we’re building new ways to chat or shop with a business on WhatsApp that are entirely optional. Personal messages will always be end-to-end encrypted, so WhatsApp can’t read or listen to them,” the company stated.

“In the coming weeks, we’ll display a banner in WhatsApp providing more information that people can read at their own pace.

The company is now expected to give users until 15 May to agree to the new terms and conditions.

WhatsApp users who do not accept its updated terms and conditions by the 15 May deadline will be unable to receive or send messages until they do so.

Their account will be listed as “inactive”. And inactive accounts can be deleted after 120 days.

Calls and notifications will still function for “a short while” but, TechCrunch reported, probably only a “few weeks”.