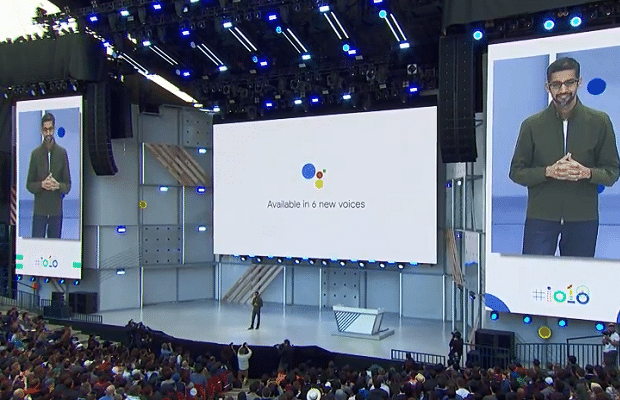 Google’s annual developer conference this year showed how the internet giant sees AI as the future, from Gmail that writes itself to an Assistant that makes appointment - based phone calls for you. We look at ten of the biggest announcements from Google I/O 2018.

Google Assistant got even smarter, using artificial intelligence software that books appointments over the phone on behalf of users by conducting voice-based conversations on their behalf.

The new tool, called Google Duplex, will launch as an “experiment” over the coming weeks. Pre-recorded demonstrations played back to the audience at I/O featured the software first booking a haircut and then making a restaurant reservation by speaking to two human employees One of the cases involved Google Assistant coping with a worker who seemed confused by straightforward questions. The computer-generated voice sounded much more natural than the virtual helper had done in the past and included “ums” and other sounds typically produced in human speech. At no point did it identify itself as a machine.”

Just before the keynote, Google announced it is rebranding its Google Research division to Google AI. The move signals how Google has increasingly focused R&D on computer vision, natural language processing, and neural networks. Meanwhile, Android Things has been introduced as the Google IoT platform for developers who want to build connected devices. The platform provides hardware and software developers with all the necessary SDKs to build all kinds of IoT devices. Google unveiled ML Kit, a new software development kit for app developers on iOS and Android that allows them to integrate pre-built, Google-provided machine learning models into apps. The models support text recognition, face detection, barcode scanning, image labelling and landmark recognition.

An updated version of Google News includes a ‘Full Coverage’ feature that lets users delve deeper into stories of their choice, providing headlines from different “trusted” sources, Q&As, social media posts and relevant timelines among other information. It will leverage elements found in Google’s digital magazine app, Newsstand and YouTube, and introduces new features like “newscasts” and “full coverage” to help people get a summary or a more holistic view of a news story. Unlike many of firm’s services, the content will not be personalised. “Having a productive conversation or debate requires everyone to have access to the same information,” Google said in blog that provides more detail.

Google Maps was given an augmented reality boost with graphics that overlay information onto camera views of the path ahead in order to provide easier-to-understand directions than before. Cartoon characters are also being introduced to guide users which way to walk, while tapping on restaurants and other select venues will now provide scores indicating how much a person is likely to enjoy a visit based on Google’s analysis of their past behaviour. Google Assistant is also coming to Google Maps to provide better recommendations to users. The maps integration also combines the camera, computer vision technology, and Google Maps with Street View. With the camera/Maps combination, it really looks like you’ve jumped inside Street View. Google Lens can do things like identify buildings, or even dog breeds, just by pointing your camera at the object in question. It will also be able to identify text.

The firm dedicated a section of its opening presentation to what it referred to as Digital Wellbeing technologies, such as scheduled screen breaks and pausing internet connectivity. Android is also to gain a new app dashboard that provides details about how much time users have spent using different services over the course of a day.

Gmail will be able to automatically complete sentences by adding several words at a time based on information collected about the user. In the example shown on stage, Taco Tuesday was entered as the email subject which the machine learning took notice of to produce more refined suggestions. Another highlighted feature of Smart Compose is its ability to enter the “mundane” details such as addresses; this will save time if you’re ever arranging meetups.

Google Photos gets an AI boost

Google Photos will propose Suggested Actions, including sending copies of an image to people it recognises in a shot, colourising black-and-white pictures, and converting photos of documents into PDFs. The Assistant tab adds the ability to make the subjects of your photos pop by selectively desaturating the background behind them. Photos is also making use of AI to detect the subject(s) of your photo, whether it’s a person, animal, or object, and in the case of people it will automatically identify the person based on previous selections and offer to send them a link to the photos they’re in. In addition, Google is introducing a new Google Photos partner program that provides developers with the necessary tools to integrate Google Photos into their products. This will open the door for more physical products, similar to Google’s own photo books.

Google Assistant gets conversational (and polite)

Google Assistant gains six new voices, can be made to encourage children to use the word “please”, and can handle follow-up requests without the need to say “hey Google” each time. Google announced a “continued conversation” update to Google Assistant that makes talking to the Assistant feel more natural. Now, instead of having to say “Hey Google” or “OK Google” every time you want to say a command, you’ll only have to do so the first time. The company also is adding a new feature that allows you to ask multiple questions within the same request. All this will roll out in the coming weeks.

Google’s Android P, or Android 9.0, is coming later this year and Google I/O is traditionally where we get our first concrete details around Google’s latest mobile OS, including adaptive battery life predictive app actions. Android P already hinted at more granular privacy settings, streamlining usability of menus, docks and screen settings. Android P is also getting new support for phones with notches and new security updates will prevent apps in the background from accessing your device’s microphone and camera. There are also new restrictions prevent apps from tracking where your data is going. Google is also introducing a new Slices API that lets you see real-time info from one app inside other apps, so you can multi-task easier without constantly needing to switch back and forth between different screens.

The Google IO event comes a week after Facebook held its own developers conference under the shadow of a data privacy scandal, which has prompted wider questions about the amount of personal information being gathered and processed by the tech industry Pichai did not refer to the controversy directly, but briefly addressed consumers’ concerns. “There are very real and important questions being raised about the impact of these advances and the role they will play in our lives,” he said towards the beginning of his presentation. “So, we know the path ahead needs to be navigated carefully and deliberately, and we feel a deep sense of responsibility to get this right.” Apple will host its own developers conference on 4 June.