End of an era: AOL shuts down Instant Messenger AIM after 20 years 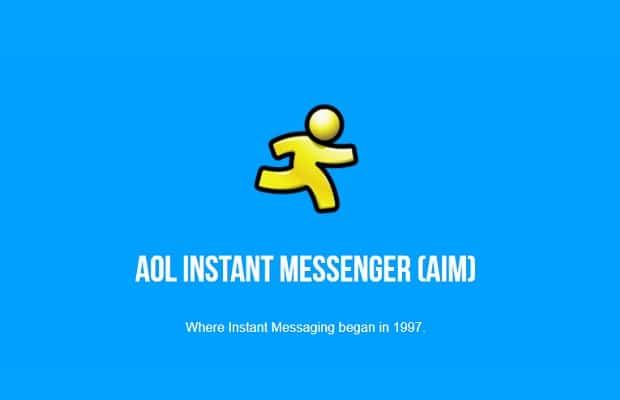 AOL is discontinuing its pioneering AOL Instant Messenger (AIM) chat platform after 20 years of service, usurped by chat apps such as WhatsApp and Snapchat.

An article on AOL’s website on Friday said AOL Instant Messenger will be discontinued on 15 December.

The program will still function until then but after that, users won’t be able to sign in and all data will be deleted. AOL says people with an aim.com email address will still be able to use it.

In a blogpost, a spokesman for AOL’s parent company explained the platform’s demise as the casualty of the evolving way people communicate.

“AIM tapped into new digital technologies and ignited a cultural shift, but the way in which we communicate with each other has profoundly changed,” wrote Michael Albers, vice president of communications at Oath.

Launched in 1997, AOL Instant Messenger was at the forefront of what was called at the time the biggest trend in online communication since email.

The platform, which provided instant access to friends and contacts on a user’s “buddy list,” was wildly popular for the first few years after its launch. It claimed more than 100 million registered users in 2001.

AOL was fiercely protective of its dominance in the instant messaging market. It fended off rivals, including Microsoft, by blocking their messaging platforms from communicating with AOL users. Its actions prompted a coalition of rivals to complain to the federal government ahead of AOL’s ill-fated merger with Time Warner that was completed in 2001.

Its popularity as a communication tool waned with the rise of text messaging, Google Chat and social networking sites.

Despite being the go-to instant messaging platform for a period, it has since lost relevance what with the rise of Facebook, Twitter, Instagram, WhatsApp, Snapchat, and the general onslaught of social media and rapid development of smartphones.

In a post online, Michael Albers, the vice-president of communications product at AOL’s parent company Oath, said: “AIM tapped into new digital technologies and ignited a cultural shift, but the way in which we communicate with each other has profoundly changed.

He added: “If you were a 90’s kid, chances are there was a point in time when AOL Instant Messenger (AIM) was a huge part of your life. You likely remember the CD, your first screenname, your carefully curated away messages, and how you organised your buddy lists.”

In April, it was announced that Yahoo would be renamed Oath as incoming owner Verizon completed its $4.8bn acquisition of the tech giant. Verizon combined Yahoo and AOL into the new company.