Interview with an influencer: Danny MacAskill on the process of working with major brands

Influencer marketing. It’s all anyone can talk about in 2017 – how brands can make the most of influencers to help promote its offering. Red Bull interviewed famous trials cyclist and influencer Danny MacAskill to look at it from the influencers' lens, to understand what it takes in his point of view, what his expectations are and how the process itself works. Danny MacAskill’s two-wheeled stunts have been viewed the world over. His most popular offering, the seven-minute Imaginate, has been watched by 65 million people and counting.
But the softly spoken Brit says he never sets out to pick up such a global audience and each time the clicks escalate, he is blown away by the popularity of what he does.
“I find the whole idea that these videos go viral very strange,” he admitted. “By the time it goes online, I don’t have expectations. I’m not thinking or hoping for millions of views or massive feedback.
“It’s nice to get feedback from the mountain bike scene and around the world but I’m always hugely surprised how the videos go especially as we don’t follow the rules of viral making videos.
“We’ll often have long intros where we’re not even on the bike for the first up to like a minute. That’s a no go from video marketing point of view.”
His most recent offering, Wee Day Out, which dates back five months, has already been viewed on YouTube nearly eight million times, a slapstick insight into what he gets up to on a day off.
And for that and every other clip he’s produced he’s pushing the boundaries as much as humanly possible.
“It’s about progressing my riding to places not been to before but it’s also about coming up with an idea and bringing my whole idea to life,” he explained.
“Films tend to be a series of these types of tricks. Whether on the more epic side, 60-foot front flips into the sea or back flips onto rooves and buildings or rolling down a hill on top of a haybale or riding through a six-foot puddle.
“They’re all ideas I’ve had and they’re all satisfying in different ways. Some are a lot more stressful than others.”
A keen watcher of downhill mountain bike competitions, for all his apparent skill on two wheels, MacAskill has never really been one for out-and-out competition despite dipping his toe in it in his native Scotland in the past.
“Years ago, I competed in smaller trials competitions in Scotland but the competition side hasn’t really appealed to me as I’m not that competitive,” he said.
“I don’t enjoy if I have a bad day in competition, I don’t enjoy that feeling. I always preferred coming with an idea, working at it until it works or it doesn’t. I prefer the kind of more creative stuff, coming up with something that seems impossible but you try it enough that you somehow land it in the end.” 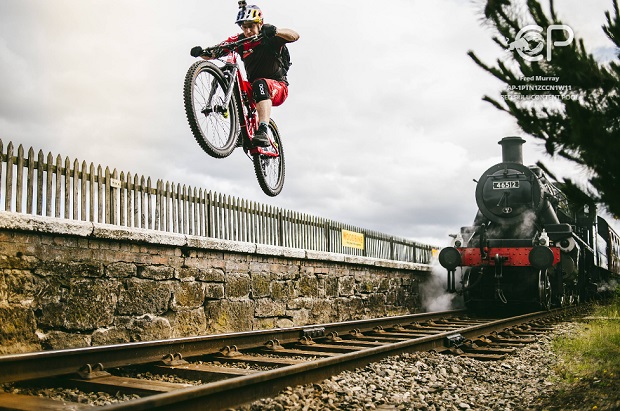 5(ish) questions with Danny MacAskill
Danny MacAskill talks about going pro, creativity, his obsessions, and retirement (if it exists).

Danny MacAskill’s story is a tale for anyone who dares to do exactly what they love.
From his Inspired Bicycles in 2009 to Wee Day Out in 2016, MacAskill has strived to follow his heart and be creative.
Virtually overnight (well, in about seven months) MacAskill went from being just your average bike shop guy to an international superstar and influencer.
That said, ever wonder what his creative process is like? What about the single most important moment of his life? Do know what he is obsessed with?
Well, wonder no more. We sat down with Danny to find out just what’s going on that head of his. In his own words – from us to you, in 5(ish) questions.

Danny, what was the single most important moment of your life?
Watching Chainspotting at my friend’s house on the Isle of Skye in 1998. That was the first time I’d seen Martyn Ashton, Martin Hawyes and Hans Rey ride in that movie.
I was already fanatical about riding my bike and riding everywhere to school and all the weekends, but that was the first time I realised what I was doing on my bike was something, you know. I was doing trials. And from that point there, that was when I really started reading mountain bike magazines, started getting really in the kit, getting a decent bike and it’s led me to where I am today.
Then, Inspired Bicycles went online on April 19, 2009 and that was a big moment for me in my life. I wasn’t really too sure where things would go after that day but I knew I had been working up to that point, bike level wise.

What’s the best advice that you’ve ever received?
Some of the best advice I think I ever received was from Hans Rey and Steve Peat back in 2010.
It was shortly after I signed with Red Bull and a few other partners and I’d gone from doing small shows and working in a bike shop, to suddenly going in the street and people recognising me. When this was all happening, Steve Peat said to me: ‘give people time’.
Even when he was in the paddock at the World Cup, he would still give his fans time to chat, give signatures and get photos on his way to the lift to go up and win a World Cup or, do what he’s expected to do.
And that’s the only piece of advice I think is very important, because I don’t want people going home bad-mouthing me. Because I don’t have any of these competition pressures, it’s easy to give people time and it’ll hopefully inspire them to ride a bit more. 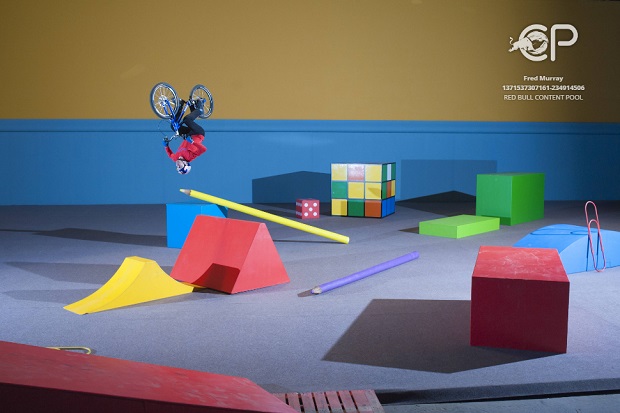 How would you describe your creative process?
I tend to think of a concept that’s theme based whether that’s location or more a concept – like in a studio or with a little bit more sort of theatrical stuff in it, to kind of give it a storyline. Whether that’s going from A to B, or thinking back to when I was a kid and imagining that you could be a toy jumper.
The cool thing about coming up with a really strong concept like Wee Day Out is that I wanted to make a slightly kind of slapstick, fun, sort of ride in Scottish countryside. And that kind of gave me a lot of scope to take my riding to places that you couldn’t get away with if you’re making a street video for instance. Or riding obstacles that you wouldn’t get anywhere else.
So once I’ve got the concept, I sit down and come up with the different tricks and obstacles that I can use like a hay bale potentially rolling down a hill or a deep puddle. We had a train at the start, so I could gap maybe onto the rail track, or gates. I tried to basically just write out a big list and maybe draw some ideas for the tricks.
Music also plays a big part in that. You really have to find the right track that’s going to fit with the idea I usually have in my head.

Has there ever been a time that you thought ‘this isn’t worth it’
I’d say the filming process is probably some of most stressful times I’ve ever had in my life, it brings on a lot of emotions that are kind of hard to deal with.
Some days you don’t actually really enjoy riding your bike. You might be trying a certain trick in a certain location for days over months and it’s still not working out. And the frustration builds up and you go into some very dark places with that. But then you go for a normal ride, one for yourself back in Glasgow with your headphones in and it’s all good again
There’s never been a point though where I think, ‘I’m never going to be back on my bike doing what I love to do.

What are you utterly obsessed with?
I’m utterly obsessed with Spotify. Music plays a huge part in inspiring me to come up with ideas for videos. And also for the last 15 years, since I started borrowing my mums Walkman cassette player back in Dunvegan, its inspired me to go out in the pouring rain on my bike when I didn’t really want to.
But if I had good music in my ears it really has played a huge part in what I’m doing today. So Spotify is my favourite piece of technology I think.

When was the last time you were moved emotionally and why?
Some of the hardest news I’ve ever had to take was hearing that my friend Martyn Ashton, who is a huge inspiration in my life, had had a bad accident and ended up being paralysed from the waist down. That was definitely some of the hardest news. And that year I had actually three friends that were affected by paralysis in different biking accidents, so yeah, that’s probably the closest thing I can think of.

What would ideal retirement be?
I’ll retire when I’m like 40… (that’s a joke). I don’t know about my ideal retirement – I just can’t even think that far ahead. But I think the ideal retirement would probably be to have a few bases around the world, all of which having amazing access to mountain biking, road biking, potentially one place that’s got some good surf in front of it. And then somewhere in the southern hemisphere that I can avoid winter and just be doing that all year round. Just still cycling, just still doing what I love and making the most of it really.