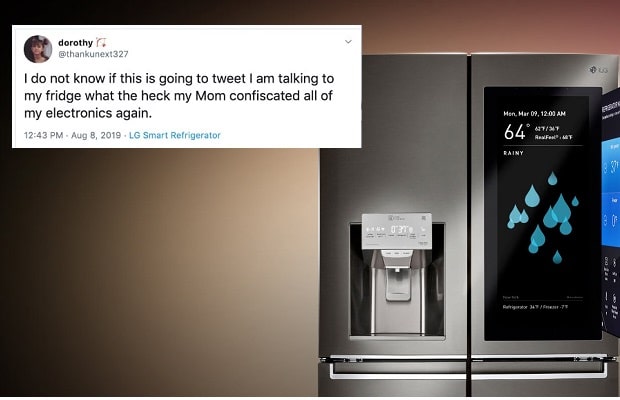 A tweet from a teenager has gone viral after she apparently used her smart fridge to post on Twitter after her mother confiscated her phone, giving the electronics brand LG a social media buzz in the process.

ger, known only as Dorothy on Twitter, reached new audiences when she started tweeting from unlikely devices, including a Nintendo DS and from a Wii console. Eventually she resorted to her smart fridge.

She tweeted: “I do not know if this is going to tweet I am talking to my fridge what the heck my Mom confiscated all of my electronics again.”

dorothy 🏹
@thankunext327
I do not know if this is going to tweet I am talking to my fridge what the heck my Mom confiscated all of my electronics again.

It won her thousands of retweets and tens of thousands of likes and has even inspired a hashtag of #freedorothy.

After sending a tweet saying her mother had taken her phone, another tweet was published, seemingly from her mother, stating: “I seen [sic] that Dorothy has been using twitter on her Nintendo. This account will be shut down now.”

I seen that Dorothy has been using twitter on her Nintendo. This account will be shut down now. pic.twitter.com/L4JqNYhUHe

Dorothy then sent a tweet saying: “my mom took my phone and my nintendo ds so i have no choice but to use my wii … thank u all for the support and love.” The tweet’s source label, which indicates the device from which a tweet was sent, confirmed that the tweet came from a Wii U.

Finally, after her mother apparently took her Wii U away as well, she sent a tweet from her LG Smart refrigerator: “I’m talking to my fridge what the heck,” she said.

A few days later she updated fans, saying: “I don’t know how I got this much support thank you so much to my supporters and @twitter this is crazy I would be lost without you and given up. I’m trying to get my things back fast so I can thank you properly!”

The second tweet was also sent via the fridge.

Although still on a tech ban, the 15-year-old managed to speak to the Guardian via her cousin’s iPad.

She told the newspaper that her mother had confiscated her electronics two weeks ago, because the girl had caused a fire when she got distracted while cooking.

“She took all my tech so I’d pay more attention to my surroundings,” she said.

“I felt mortified! I was worried because I’ve been bored all summer and Twitter passes the time for me.”

Before turning to the fridge, the teenager had managed to tweet from her Nintendo DS, which her mother discovered and added to the ban.

“I seen (sic) that Dorothy has been using twitter on her Nintendo. This account will be shut down now,” said a tweet seemingly posted by the teenager’s mother.

But Dorothy was not to be discouraged. She also managed to tweet from a Wii console, and said she would be trying to look for her phone while her mother was out.