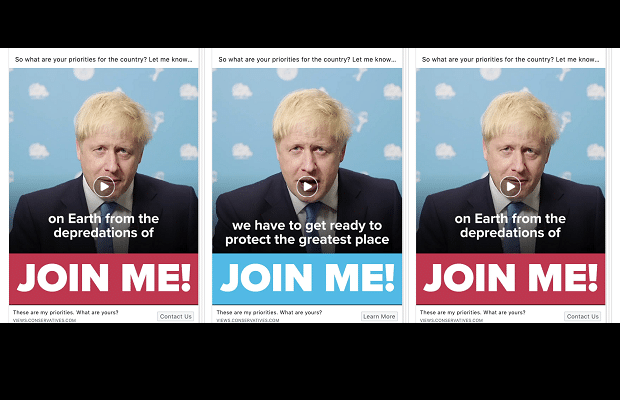 The new UK Prime Minister Boris Johnson has appeared in hundreds of almost identical Facebook and Instagram ads featuring tiny variations, as his campaign team look to find the most effective message ahead of a possible general election.

In the days since Johnson was selected as Tory leader, hundreds of ads have appeared on the social networks, repeating his promise “to deliver Brexit by the 31 October”.

According to Facebook’s ad library, which collects all political ads on Facebook and Instagram, the Conservative Party ran 280 ads on Boris’s first full day. On Wednesday, it was running around 544.

The ads are frequently identical, with just a few tiny variations. Two versions of one video ad, calling on people to “join now and build the movement” differ only in the colours they use.

One features a large splash of the exact red used by the Labour Party. The other has the shade of turquoise associated with the Brexit Party.
Other variations include changing the position of a photo, or altering the text to include slightly different messages.

The other reason to use multiple variations of ads is to target them specifically at different audiences, a practice known as micro-targeting.

Using different versions of ads is also a common practice for advertisers running ads across different social networks, or on desktop and mobile.

The ads direct anyone who clicks on them to a page on the Conservative website, with a survey asking: “What’s the most important issue for you and your family right now?”

In order to complete the survey, it’s necessary to add a name, postcode and email address. Clicking “submit” sends the data to the Conservative Party and agrees to it “using the information I provide to keep me updated via email, online advertisements and direct mail”.

The ads themselves switch between asking what people’s priorities are, and a video of Boris Johnson hammering home his leadership election messages: deliver Brexit, unite the country, and defeat Corbyn.

Social media-optimised digital campaigning is now a standard part of political campaigning. Yet it is striking that less than a day after he became PM, the Johnson team has launched its online election campaign, and using the tactics that Vote leave camapign director Dominic Cummings deployed so effectively during the Brexit referendum.

While Johnson has ruled out the prospect general election, it’s likely that his plans to either renegotiate the Withdrawl Agreement with the EU or push through a No Deal brexit through parliamnet will be blocked, meaning a general election or referendum is the most likely way to break the political deadlock.

The flurry of Facebook ads would support this theory that a snap general election is being planned by the governemnt within the next year, as the next ‘official’ UK general election date isn’t due for nearly three years, on May 5th 2022.