Who won the social Super Bowl? Top 10 brands on Twitter

Pepsi, T-Mobile and Avocados from Mexico racked up the most Twitter engagement during the Super Bowl, according to new research. More than 27.6 million tweets were sent last night during Super Bowl 51, with many social media useretalking about the ads as much as they were about the game itself. This year, fans sent more […]

Pepsi, T-Mobile and Avocados from Mexico racked up the most Twitter engagement during the Super Bowl, according to new research. More than 27.6 million tweets were sent last night during Super Bowl 51, with many social media useretalking about the ads as much as they were about the game itself.
This year, fans sent more than 27.6 million Tweets globally about #SB51 during the live telecast on @NFLonFOX, uncluding pre- and post-game conversion. 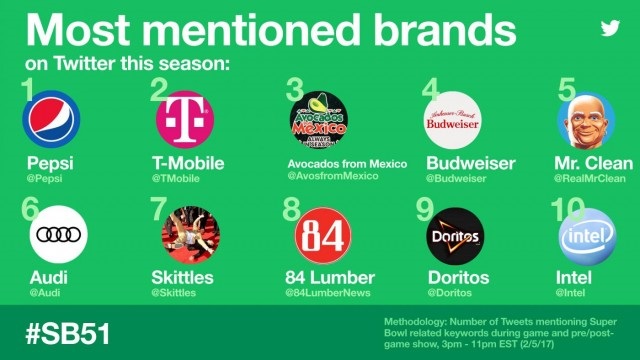 Below are the brands that stole the spotlight during this year’s Twitter Ad Bowl, ranked by Twitter chatter:
1. Pepsi (@pepsi)

There are a million reasons to love #Joanne, but here's one more: a ✒️️ CD #ForTheFans. RT for #Entry #PepsiHalftime https://t.co/T8ddyXGhkn pic.twitter.com/LaSOCXSjn5

We wanna see you drop it low! Tweet video of your best touchdown dance with #UnlimitedMoves and you could be RT’d by @JustinBieber! pic.twitter.com/AIU0euphtS

Our #BigGame spot is out! The greatest of all the #AvoSecrets has been leaked. The world knows #Avocados have good fats. The truth is out! pic.twitter.com/SCMlXOucWj

This is the story of our founder and his pursuit of the American Dream. #ThisBudsForYou pic.twitter.com/TuJO7NSEWs

Progress is for everyone. At Audi, we are committed to equal pay for equal work. #DriveProgress pic.twitter.com/pF0t14ido8

My #SB51 commercial is like a beautifully thrown touchdown filled w/ love and Skittles. I’m crying just writing about it. #TasteTheRainbow pic.twitter.com/RpWAZISXVP

When you just can’t give up your spot on the couch to refill the Doritos, @AmazonEcho makes the completion. https://t.co/mFw1VuwQBi

Don’t call it a comeback. Brady put the O.T in G.O.A.T. See our first ever fan-made video with Tom Brady. #ExperienceMore #SB51 pic.twitter.com/oR8M2SQyum