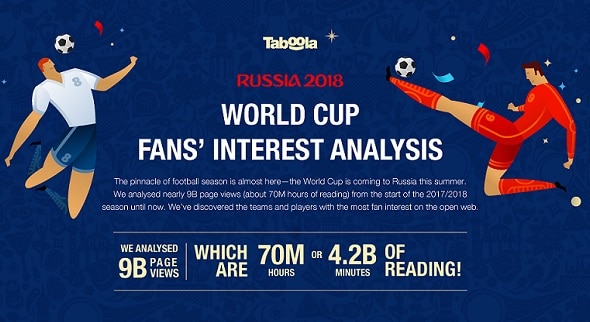 With the World Cup in Russia is set to kick off next week, new analytics reveals that Spain vs. Portugal and Sweden vs. Germany are the most anticipated matches worldwide, as the marketing battle for consumer attention begins.

Taboola has analysed nearly 9B page views (the equivalent to nearly 70M hours of reading) from the start of the 2017/2018 season until now. The findings show the teams and players with most fan interest on the open web.
Here’s a few fun facts from the findings:

If page views were equal to matches won, here’s how teams would stack up by group:

While there may be no surprise that Brazil dominates Group E with 75% of page views, Mexico has beaten Germany to top place in Group F with 41% of page views. And despite a sensational season for Mohamed Salah, Egypt would be going home early with just 8% of Group A page views.

The most anticipated matches in every group based on page views are as follows: