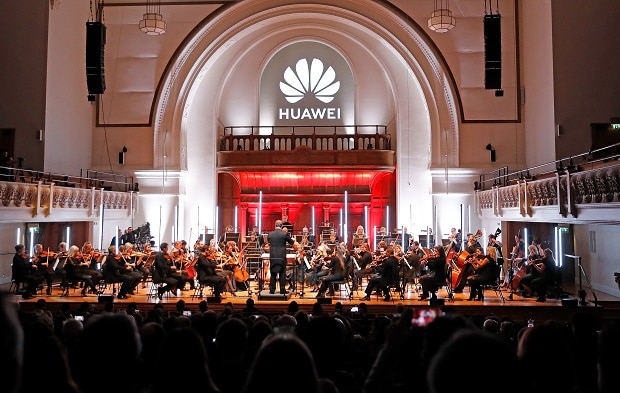 Huawei has used the power of AI and human expertise to compose the final two movements of Schubert’s famous Symphony No. 8. commonly known as the ‘Unfinished Symphony.

Symphony No. 8 has remained incomplete for 197 years and despite numerous attempts it remains one of the most intriguing pieces of unfinished symphonic music of all time.

The London event was hosted by musician, Myleene Klass at the iconic, Cadogan Hall and saw the 66-piece English Session Orchestra perform to an audience of over 250 guests featuring models, Erin O’Connor, Laura Whitmore and Daisy Lowe, actor, Luke Pasqualino and singer, Nicola Roberts showcasing for the first time this unique ending to Schubert’s Symphony No. 8.

Huawei’s completed version of Schubert’s Symphony No. 8 was created by running an Artificial Intelligence model benefitting directly from the processing power of the dual NPU (Neural Processing Unit) in the Huawei Mate 20 Pro smartphone – designed specifically with AI-based tasks in mind.

Analysing the timbre, pitch and meter of the existing first and second movements of the symphony, the AI model then generated the melody for the final, missing third and fourth movements. Huawei then worked with Emmy award-winning composer Lucas Cantor, to arrange an orchestral score from the melody that stayed true to the style of Schubert’s Symphony No. 8.

“At Huawei, we are always searching for ways in which technology can make the world a better place. So, we taught our Mate 20 Pro smartphone to analyse an unfinished, nearly 200 year old piece of music and to finish it in the style of the original composer” commented Walter Ji, President CBG, Huawei Western Europe. “We used the power of AI, to extend the boundaries of what is humanly possible and see the positive role technology might have on modern culture. If our smartphone is intelligent enough to do this, what else could be possible?”

Lucas Cantor, Composer said “My role was to draw out the AI’s good ideas and fill in the gaps to ensure the final output was ready to be played by a symphony orchestra. The result of this collaboration with AI proves that technology offers incredible possibilities and the significant and positive impact it can have on modern culture.”

Schubert’s Symphony No. 8 in B minor is considered to be the archetypal ‘Unfinished Symphony’. Musicologists are still in disagreement as to why Schubert failed to complete the piece, some cite his ill health, others claim that he was distracted by his follow up piece of work, but what is agreed upon is that he was charting new musical terrain with the piece.

Further information and the finished symphony can be found here.