Globally 19% of internet users own a wearable device 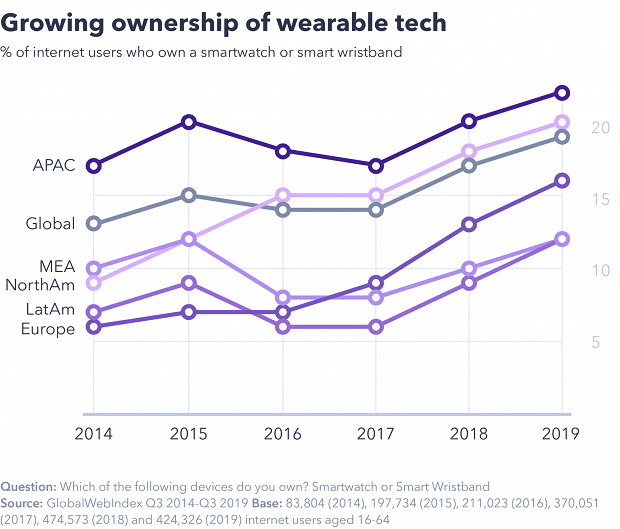 Nearly one in 5 internet users worldwide now own a wearable device, up 7% from 2014, according to new research.

Since 2014, wearable owners are increasingly less likely to support attitudes which suggest they’re concerned about status.

The research tracked three attitudes over 5 years and comparing what percentage of wearable owners and non-wearable owners agree with the following: (1) I like to keep up with the latest fashions; (2) having the latest technological products is very important to me; and (3) I tend to buy the premium version of a product.

When this is broken down by region, we can see that Asia Pacific is the most concentrated region for wearables, with 22% of internet users owning such a device.

The top three countries for wearable ownership are all found in Asia, with China leading the pack at 28%, followed by Singapore and Hong Kong – both at 25%.

Despite North America being second to China in terms of unit sales, it remains the world’s most valuable market – reaching US$2.0 billion in Q2 2019.

What’s also particularly intriguing is the accelerating growth of the market in Europe since 2016. This transatlantic growth should come as little surprise after considering that the Apple watch was first released in April 2015.