Dancing Russian robot unmasked as a ‘person in a suit’ 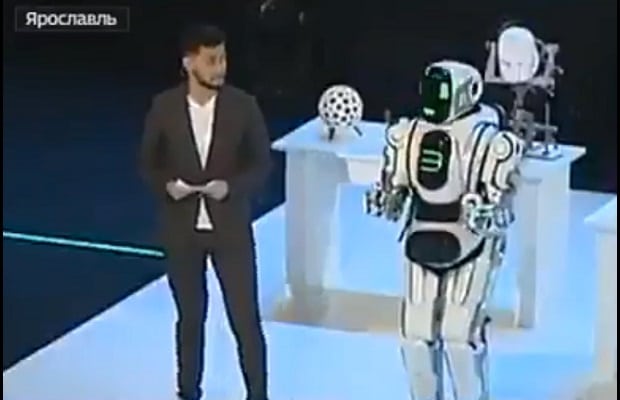 A Russian robot named ‘Boris’, claimed to be a high tech invention on state TV has been revealed as a man in a suit.

Russia-24 praised ‘Boris’ for its dancing skills only for it to emerge the android was actually a man in a costume.

The revelation came after a number of unconvinced Russian journalists began to question the robot’s authenticity.

They are reported to have questioned the android’s lack of external sensors, how it was made so quickly and why the robot had made so many “unnecessary movements” when showing off its dancing skills.

They also noticed that a person would have fitted inside the “robot” perfectly… It all started to fall apart when a photograph was posted on social media in which a person’s neck is clearly visible in a gap in the suit.

It then emerged ‘Boris’ was in actual fact a 250,000 rouble (£2,975) costume called Alyosha the Robot, made by a company called Show Robots.

According to reports, a photograph published by MBKh Media, a news agency founded by Vladimir Putin’s opponent Mikhail Khodorkovsky, appeared to show an actor wearing the suit ahead of the annual Proyektoria technology forum, where “Boris” was displayed. MBKh Media insisted that the event’s organisers did not try to pass off the robot as real, despite it being described as such on state television. Footage of the robot reportedly disappeared briefly from Russia-24’s YouTube channel on Wednesday morning but it came back again a short while later.