Digital assistants “to outnumber people by 2021”

Globally, the native digital assistant installed base is set to exceed 7.5 billion active devices by 2021, which is more than the world population according to the US Census Bureau on May 1, 2017. But fear not – Skynet, from the popular Terminator movies, does not feature among the leading digital assistants. Instead, Google Assistant will […]

Globally, the native digital assistant installed base is set to exceed 7.5 billion active devices by 2021, which is more than the world population according to the US Census Bureau on May 1, 2017. But fear not – Skynet, from the popular Terminator movies, does not feature among the leading digital assistants. Instead, Google Assistant will dominate the voice AI–capable device market with 23.3% market share, followed by Samsung’s Bixby (14.5%), Apple’s Siri (13.1%), Amazon’s Alexa (3.9%), and Microsoft’s Cortana (2.3%).
Ovum’s Digital Assistant and Voice AI–Capable Device Forecast: 2016–21 found that smartphones and tablets clearly lead the voice AI–capable device market, with 3.5 billion active devices in 2016, most of which use Google Now and Apple Siri.
However, the use of AI in conjunction with other devices greatly increases consumer engagement and is set to unlock new opportunities, particularly in the home.
Ovum expects an exponential uptake of voice AI capabilities among new devices, including wearable, smart home, and TV devices, with a combined installed base of 1.63 billion active devices in 2021, a tenfold increase on 2016. Despite all the hype that surrounds AI-capable connected speakers, TV devices (i.e. smart TVs, set-top boxes, and media streamers) offer a larger opportunity, accounting for 57% of that installed base in 2021. 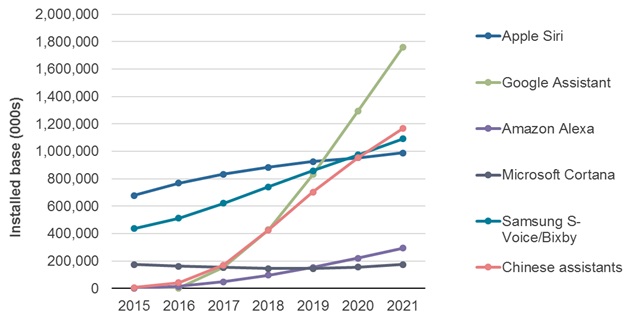 ce: Ovum
Although most of the AI capabilities will reside on the network rather than in the device, native vendor-led implementations will be critical to gather the contextual and personal data that will feed the AI engines. Newly launched devices from Samsung and Google exemplify this.
The most important challenge for vendors will be to deploy and maintain their digital assistants globally. At the end of 2016, over 95% of the installed base for Amazon’s Alexa and Google Assistant was in North America, compared to 24% for Apple’s Siri. By 2021, 47.6% of voice AI–capable devices in use will be in Asia & Oceania. With an active installed base close to 1.2 billion devices in 2021, digital assistants of Chinese origin are set to be as powerful as Apple’s Siri or Samsung’s Bixby. They already accounted for close to 43 million devices in 2016, led by companies such as Baidu and iFlytek.
“Ultimately, a digital assistant is just another user interface. It will only be as good as the ecosystem of devices and services that it is compatible with. Partnerships between tech giants and local service providers will therefore be key differentiators” said Ronan de Renesse, Practice Leader for Ovum’s Consumer Technology team and author of the report. “There is a disconnect between the ‘know-it-all, do-it-all’ approach that current digital assistants are aiming toward and the highly personalized virtual assistance experience that consumers have dreams/nightmares about. Whoever can bring personal consumer data in a secure, non-creepy way to digital assistance will be able to bridge that gap and capture most of the opportunity.”
Source: Ovum