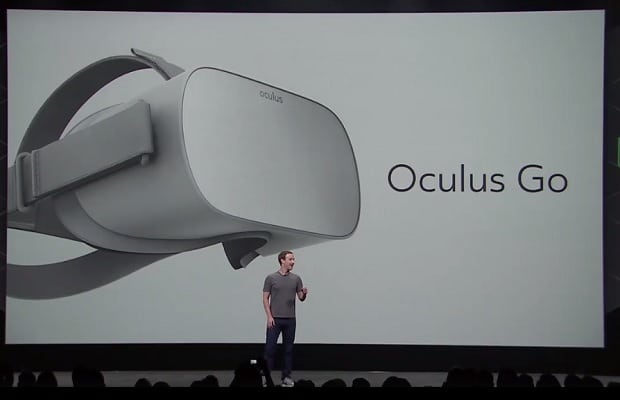 Facebook has unveiled the $199 Oculus Go, a standalone virtual reality headset that does not require a PC, console or smartphone to work.

The device will launch next year and forms part of the company’s plan to attract a wider audience to VR which has so far resulted in dissapointing sales.

While introducing the Go, Zuckerberg said it’s a product meant to fill the gap between the affordable Gear VR and the Oculus Rift.

Speaking at Facebook’s yearly virtual reality developers conference in San Jose, Mark Zuckerberg, chief executive and co-founder of Facebook acknowledged the slow adoption of the technology to date. But he said his company’s goal was that one day, it would get one billion people into VR.

To get there, the company needs to create a premium, standalone VR device that offers free movement. It hasn’t managed that yet – the new Oculus Go should still be regarded as a budget VR experience.

Oculus Go is a lightweight headset which resembles a cross between Google’s Daydream set and Samsung’s Gear VR, which is also powered by Oculus’ technology.

It’s secured to the user’s face by a series of adjustable straps, and contains an LCD screen which projects the VR content directly through the lenses, bypassing the need for a mobile or linked PC.

Users will navigate Oculus Go using a simple gamepad controller, while audio will play through inbuilt speakers – though there’s also a headphone jack if you prefer headphone output.

The original Oculus Rift, which currently costs £399 for the headset and Touch controllers, requires a powerful gaming PC to run it, which costs around £1,000.

Similarly, optimised VR content on smartphones is limited to higher-end models: Gear VR is designed to run on its Galaxy line of phones, while Daydream works with a wider range of Android handsets.

The three largest VR vendors, Oculus, HTC’s Vive and Sony’s PlayStation VR have all slashed the price of their headsets in recent months, which analysts attribute to a lack of consumer interest over high prices and lack of strong gaming titles.

Apple, meanwhile, has chosen to focus on augmented reality (VR), which transposes digital elements into real-world environments via the iPhone’s camera. Its ARKit framework is intended to help developers create AR apps for inclusion in the App Store, including standardised motion tracking and camera environment capture.