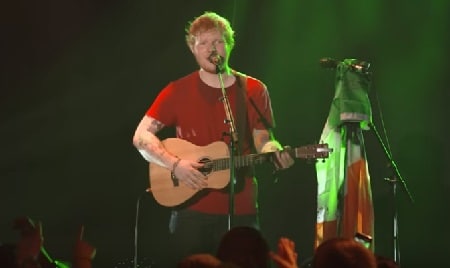 Ed Sheeran was the most acceptable artist to play in the workplace, with Eminem least suitable according to new research from LinkedIn and Spotify.

LinkedIn’s partnership with Spotify is designed to lift the lid on music in the workplace, a factor which has a huge impact on a person’s own professional brand.

Key findings of the report:

Ed Sheeran was been voted “Desktop of the Pops”; the most acceptable artist to play in the workplace (42 per cent), beating Coldplay (28 per cent) and Bruno Mars (19 per cent) to the top spot.

The study shows many workers think listening to music at work helps make them be better at their jobs.

Almost three quarters of workers (73 per cent) think music makes them more productive, while the two thirds (67 per cent) of professionals who listen to music at work argue it keeps them motivated (61 per cent), helps them to keep calm (41 per cent) and helps them be more creative (34 per cent).

And it has other benefits too – 17 per cent of workers admit to playing music to drown out the sound of their fellow colleagues.

Darain Faraz, LinkedIn’s Careers Expert, comments, “We’ve partnered with Spotify to find out what the UK really thinks about music being played at work. Ultimately, how we behave in the workplace plays a huge role in developing our professional brand so it’s important to remember what you want to communicate about yourself to others, whether that’s online or offline. Listening to music can have positive effects on productivity, creativity and motivation levels – just make sure you’ve been considerate and consulted your colleagues before blasting Eminem on a Monday morning!”

The study also found that music tastes can be divisive and potentially harmful to an employee’s professional brand if polarised opinions aren’t carefully navigated. One in 10 professionals (10 per cent) admit to judging their colleagues by their taste in music choice or music genre, and while roughly the same percentage (11 per cent) of workers proclaim to be “the office DJ”, regularly selecting the music for others, 17 per cent believe it’s rude to impose music choices on others without checking first. And while a quarter (27 per cent) try to be considerate in their music selection, eight per cent are reluctant to ask their fellow colleagues to turn their music off or down – even if it’s bothering them.

Most likely to cause a workplace tempo tantrum is rapper Eminem, who was voted the least acceptable artist to have on at work (29 per cent). While rap music is a particularly unpopular choice for the office airwaves, with Kanye West (23 per cent), Drake and Skepta (both 12 per cent) also in the top five, it’s pop heartthrob Justin Bieber who is the third placed ‘least acceptable’ artist to play at work (14 per cent).

Pop music is employees’ workplace go-to, with more than half of workers (55 per cent) selecting it as their genre of choice, but there are some surprising tastes across different industries in the UK. LinkedIn data identified the sales industry as most likely to select country music (15 per cent) as the most acceptable music genre for the workplace while recruitment workers are most likely to select metal (15 per cent). Elsewhere, reggae strikes a chord with 19 per cent of marketing professionals.

To bring harmony to the workplace, LinkedIn has teamed up with Dr. Hauke Egermann, a music psychologist, to offer the following advice:

For those looking to hit the right note in the workplace, LinkedIn and Spotify have unveiled the Ultimate Office Playlist; 50 work-appropriate songs curated from thousands of the UK’s top office playlists.

Find out more and join in the conversation on social using #musicatwork.

The most acceptable artists to play in the workplace:

The least acceptable artists to play in the workplace:

Censuswide surveyed 2,027 UK adults who are employed between 16th and 22nd August 2017 using data from Spotify to obtain the most popular artists in the UK in 2017.