Netflix teams with Snapchat and Shazam for Stranger Things 2 promo 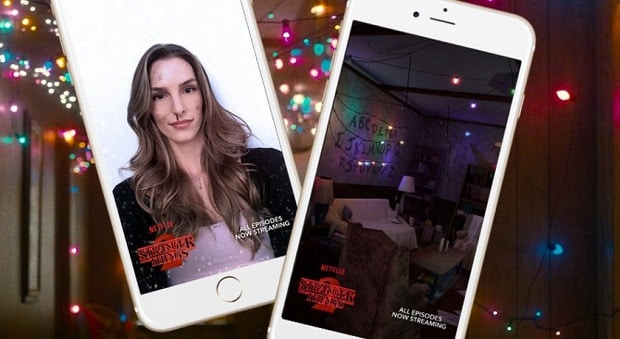 Snapchat and Netflix are partnering for a first-of-its-kind World Lens -- featuring a portal into a new world -- for the launch of Stranger Things 2.

Snapchat’s first portal World Lens uses new technology to let you walk into another world — in this case, the “Upside Down” version of Joyce Byer’s famous living room.

This is an augmented reality (AR) experience — you can move around inside, experience surprises, and even see back out through the door into the real world. Spooky fun! The Portal World Lens only works on iPhone 6S and above with iOS 11 installed.

If you are not on an iPhone 6s with iOS11 and turn the camera around, you’ll see Byer’s living room in an interactive “gyroscope Lens” (so it’s the same experience as portal, minus walking through the door). For interactive easter eggs, tap on the objects in the room.

Every Snapchatter, regardless of phone-type or OS, will have a face Lens that mimics Eleven’s nosebleed available in their app.

Second, in another first for Snapchat, you can unlock the Lens by using Shazam in Snapchat when the Stranger Things theme song plays — such as watching the opening credits.