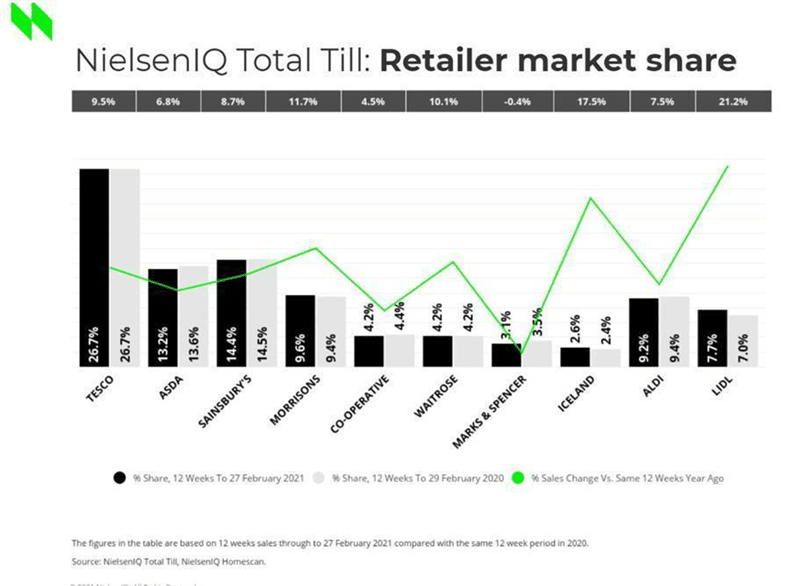 British shoppers spent £1.5bn on online groceries in the last four weeks ending 27th February 2021, with the online share of grocery sales now reaching 17%. This is the highest ever share for online grocery sales in the UK and a 1% increase in share in just a month, reveals new data.

The data, from released today by NielsenIQ, shows that in the last four weeks ending 27th February, the number of British households shopping for their groceries online has more than doubled in the last year, reaching 41% compared to 18% at the same point in 2020. This is equivalent to 11.8m households and is a 132% increase in sales compared to the same period last year. In contrast to this, sales at bricks and mortar stores declined by 1% year on year in the last four weeks.

Total Till sales for February have grown by 10.6% year on year, the same figure from the previous four week period. However, this remains at the highest level since June 2020, when sales growth peaked at 14%. Despite the strong levels of grocery sales, NielsenIQ data shows that in the one week period ending 27 February, consumers are now spending less on those essential items that were previously involved in mass purchasing. This includes sales of rice and grains (-15%), dry pasta (-18%), canned or packet soup (-19%) and toilet rolls (-12%)² which have all declined in sales since the pandemic panic buying began in the UK. This reflects the fact that sales for these items first shot up this time last year as discussions of a lockdown began, and one year on, we now see the tide beginning to change as British consumers look ahead to restrictions lifting.

In terms of retailer performance, Lidl (21.2%) has shown the strongest growth over the last 12 weeks, as the discounter continues to benefit from its Lidl Plus loyalty app. Iceland (17.5%) also followed with strong sales growth, whilst Morrisons (11.7%) continues to grow faster than the other ‘big four’ retailers.

Mike Watkins, NielsenIQ’s UK Head of Retailer and Business Insight, said: “One year on since the pandemic began in the UK it’s evident that a lot has changed in terms of consumer shopping patterns. Online grocery has now become a permanent fixture for many UK shoppers – it is now past the ‘tipping point’ and is at the ‘sticking point’. Consumers no longer feel like they have to shop online, but do so because they prefer to, particularly now that many retailers have expanded fulfilment capacities. Even when we exit lockdown and start to return to some normality, we anticipate that online demand will continue to grow ahead of the market.”

Watkins continues: “It has been one year since panic buying began, and in the final week of February 2021 we saw decline in the ambient – shelf stable food – category for the first time in a year. As vaccination programmes prove successful and with the government outlining a clear roadmap out of lockdown, it’s clear that this has been a boost to consumer confidence and signals another change in purchasing habits.”