Revealed: The most successful health and fitness influencers 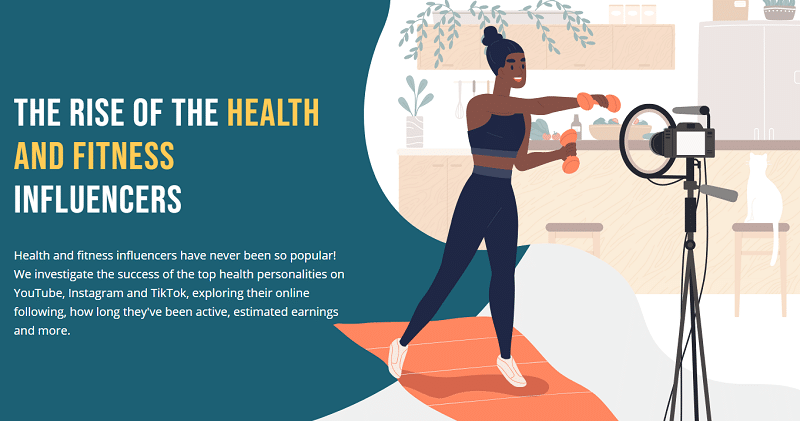 Health and fitness personalities have increased over the past year across all social media and Currys PC World has revealed the Top 100 Most Popular Health and Fitness Influencers in the World, highlighting their earning per year, per post and number of followers amongst other metrics.

The top 3 most health and fitness influencers are:

While health and fitness influencers have been popular on social media for some years now, the events of 2020 acted as a catalyst to firmly establish their place in society. With national lockdowns resulting in gym closures, many people turned to the likes of Instagram, YouTube and TikTok for workout guidance and nutrition advice. Health and fitness personalities have never been in such demand.

A recent study by Currys PC World explored the world of health and fitness influencers, investigating just how popular the top social media stars are, how much they earn and what type of content they share. Read on for some of the top findings. Or to examine the data yourself, check out the health and fitness influencer index and filter the list by followers, earnings and more.

• Chloe Ting is the most followed health and fitness influencer in the world, with a total of 20 million followers
• Simeon Panda is the highest earning health and fitness influencer, earning an estimated total of US $140 million (based on cost per impressions)
• Pamela Reif earns the most per social media post, averaging an estimated US $38.7k
• TikTok skyrocketed in popularity in 2020 and now influencers can earn thousands of dollars from brand collaborations on the platform

It can seriously pay off to be a successful health and fitness influencer, with those at the top of the list taking home millions of dollars per year. Simeon Panda tops the rich list, earning an estimated $17.5 million a year across Instagram, YouTube and TikTok (based on cost per impressions), which could total $140 million across his entire social media career. As a body builder, he specialises in fitness content, with many of his videos over the last year presenting workout routines aspiring weight lifters can do at home.

Matt Morsia, YouTube’s top health and fitness earner, specialises in fitness and nutrition advice, having formerly trained for the Olympics. And Demi Bagby, TikTok’s top earner, rose to popularity off the back of snippets from her adrenaline-packed life, such as acrobatic stunts and extreme sports.

The UK’s favourite fitness influencer, Joe Wicks, is also doing pretty well for himself, after growing his online following with fitness plans, healthy recipes, and most recently, virtual PE classes. The social media personality is estimated to earn $13.9 million a year, working out at over $5,000 per post. Having diversified his content to appeal to all age-groups, including older people and children, he could have the recipe for long-term success. 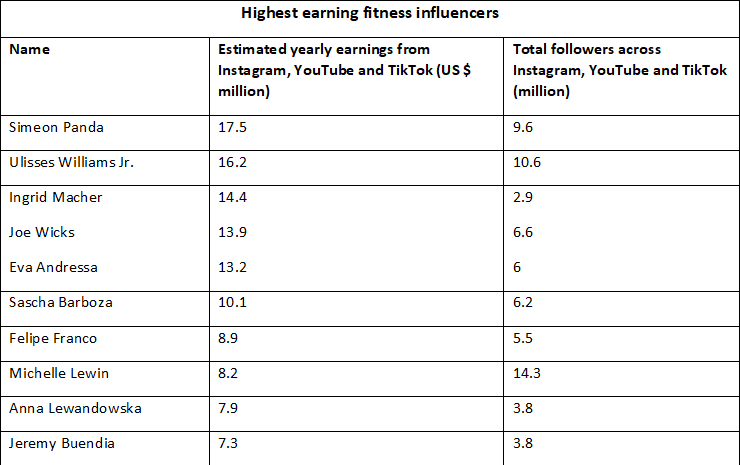 The most followed health and fitness influencers

• Chloe Ting, who found success through her fitness programs, has the highest overall following, totalling nearly 20 million across Instagram, YouTube and TikTok
• Chloe Ting is also the most subscribed-to fitness YouTuber, with 16.5 million subscribers
• Michelle Lewin, popular for workout videos, has the most followers on Instagram (13.8 M)
• Demi Bagby, cross-fit athlete and ex-cheerleader, has the most followers on TikTok (14 M)

Followers and subscribers are a big deal when it comes to finding success as a social media influencer, as generally the larger your community is, the higher you can charge for brand collaborations and advertising opportunities.
Among the top 100 health and fitness influencers, the majority have accumulated more than a million followers across Instagram, YouTube and TikTok; with Chloe Ting topping the list. She’s followed by Demi Bagby who has 16.5 million followers – and happens to be the most followed on TikTok (14M) – and Michelle Lewin who has 14.3 million followers and is the most followed influencer on Instagram (13.8M).

Generally speaking, those at the top of the list are fitness influencers who specialise in workouts users can follow at home, although yoga and nutrition are also popular niches. Chloe Ting, for example, shares entire exercise plans tailored for beginners and fitness fanatics alike. They span over several weeks and promise to help you get fit, lose weight or get toned. Michelle Lewin tends to post shorter videos that offer exercise tips rather than full workouts and are tailored for more advanced fitness fans. Demi Bagby, on the other hand, intersperses workout videos among content covering her high-octane lifestyle – wake surfing, truck racing, somersaults, you name it!

The health and fitness influencers with the highest engagement

While followers are important, engagement is also crucial for demonstrating influence. The index ranks the top 100 health and fitness influencers based on the average number of likes or views on each post.

What type of content is found on each platform?

Many of the top health and fitness influencers have a presence across Instagram, YouTube and TikTok, and while some content is repurposed across them all, each platform has its own niche. Instagram, for example, highlights more of the day-to-day lives of the influencers, while YouTube is the ideal platform for posting longer, more in-depth content like workouts and cooking tutorials.

TikTok, on the other hand, is the new kid on the block, having risen in popularity over the last year. It now has around 1 billion monthly active users [1] and the top influencers on the platform can earn between $50-150k for a successful brand partnership on the platform. [2] With 41% of TikTok users aged between 16 and 24 [3], the platform is all about keeping content fun. On here, you’ll find energetic fitness challenges, dance routines and snappy workout snippets with pumping soundtracks.

You can view a full break-down of the top most popular health and fitness influencers here.