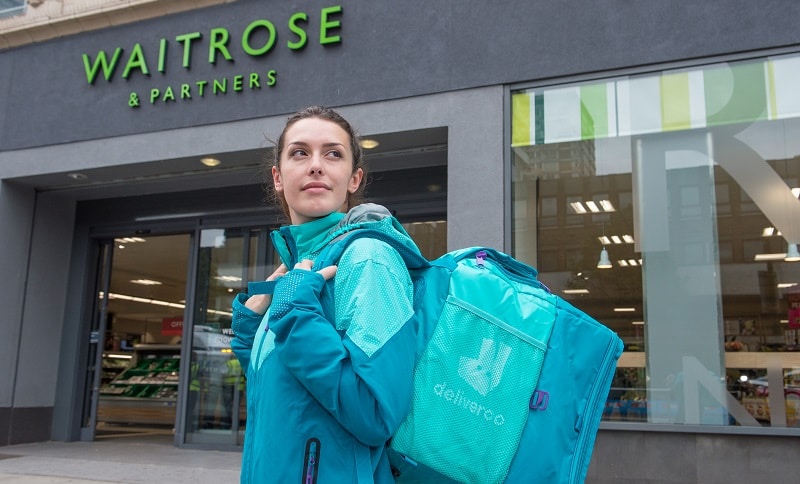 Waitrose has struck a deal to sell online groceries through Deliveroo, sparking speculation over a possible tie-up with Amazon, which owns a major stake in the takeaway courier.

The deal will give customers a fast-track service from its stores to their homes, with food that could be delivered within an hour depending on conditions.

The John-Lewis owned supermarket says it plans to run a 12-week trial starting from 1 September and it coincides with the end of Waitrose’s 18-year relationship with online delivery firm, Ocado, which will start selling M&S food from 1 September.

Households will be able to use the Deliveroo app to choose from more than 500 Waitrose products, including ready meals, fruit, vegetables, meat, milk, snacks, store cupboard and cleaning essentials, as well as beer and wine.

Shoppers can order from one hour after the shop opens to one hour before it closes and you can also track the progress of their order and where the delivery driver is on the app.

Opening hours will vary by store and there is a minimum spend of £10, with delivery charges between £2.50 and £4.99, or free for Deliveroo Plus members

James Bailey, executive director for Waitrose, said: “This gives us an opportunity to give our customers a taste of what the future of convenience shopping could look like for us.”

The trial will start in stores in Bracknell and Clifton, followed by Surbiton, Cambridge and Notting Hill on 3 September.

Waitrose said that if the trial goes well, it would expect to extend it to more locations. It hopes the trial will reach more than half a million households.

Deliveroo has teamed up with other supermarkets, including Aldi and M&S, in recent months to deliver groceries to customers’ homes.

A de-facto partnership with Amazon?

Amazon bought 16% of Deliveroo earlier this year in a contentious deal that has been tightly controlled by competitive watchdogs.

The ecommerce giant is already fighting to expand its presence in British online food through its Fresh arm, which stocks Morrisons products.

Last month, it became the first player to offer free shipping to customers using the Amazon Prime subscription service in what was seen as a turning point for the industry, and it is believed to plan to roll out 30 of its “Go” stores without payment.

Amazon founder Jeff Bezos is rumoured to have had talks to buy Waitrose in 2018, a claim rejected by John Lewis.

The supermarket chain’s parent, the John Lewis Partnership, has said it will place greater focus on online growth as it pushes forward with a strategic review. Waitrose has committed £100m to expanding its online operations, with a new fulfilment centre in London and recruitment push for new drivers. It will pick items from stores, enabling it to service around 90% of UK postcodes due to its 330 stores nationwide.

Waitrose has increased its own delivery capacity from the current 160,000 orders per week to 250,000. The company said that its website would account for about £1bn of sales, representing 15% of its total revenue, by the end of this year, and that recent growth would in effect replace the profit made by the Ocado contract over the same time.