Twitter has flagged down one of Donald Trump's tweets after the president wrote "When the looting starts, shooting starts" in response to violent protests over the death of a black man in Minneapolis. 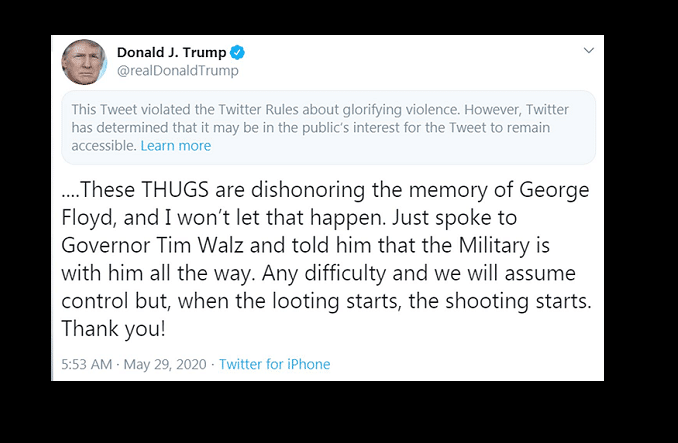 The move marks a further escalation in the social media company’s row with the US president, and comes hours after President Trump signed an executive order aimed at removing some of the legal protections given to social media platforms.

Mr Floyd, 46, died on Monday after a police officer knelt on his neck while he was handcuffed and lying face-down on the road. He could be heard repeatedly saying "please" and "I can't breathe" to the officer, who kept his knee on his neck for almost eight minutes - including after Mr Floyd had become unresponsive.

In his first mention of the incident, the president blamed the protests on "a total lack of leadership" in Minneapolis, directing a tweet towards who he described as "the very weak radical left mayor, Jacob Frey".

Trump also suggested he could "send in the National Guard and get the job done right", before then making the comment about shooting unarmed looters.

The US president’s tweet, posted on Thursday night Washington time, warned people in Minneapolis protesting against the killing of a black man, George Floyd, by a white police officer that he would send the military to intervene if there was “any difficulty”.

The warning was accompanied by a link to its policies about public interest exceptions.

A separate statement from the official Twitter Communications account explained that the tweet had been flagged "based on the historical context of the last line, its connection to violence, and the risk it could inspire similar actions today."

We have placed a public interest notice on this Tweet from @realdonaldtrump. https://t.co/6RHX56G2zt

Twitter's decision is the latest indication that the company will no longer give high-profile users free reign over their comments on the platform.

Earlier this week, Twitter used its fact-checking function to attach warnings to the president's tweets for the first time. That led the President to threaten to "shut down" the social networks over allegedly stifling free speech.

The executive order signed by Mr Trump has no immediate effect on the social networks, however - it instead begins a lengthy process that may result in changes down the line.