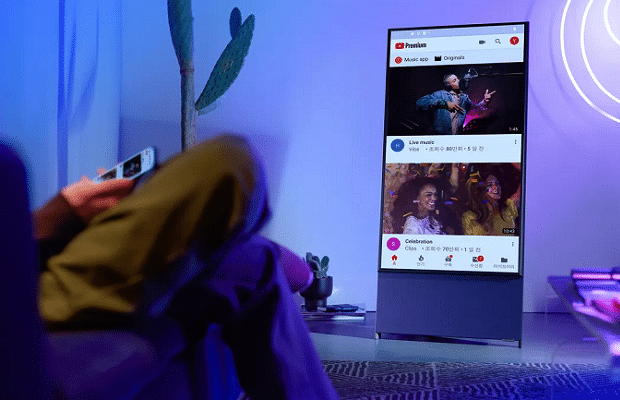 The CES consumer tech show in Las Vegas features thousands of companies from Google and Samsung to unknown startups, all showcasing their 'next big thing' in tech. We take a look at the most notable gadgets to come out of this year's expo, from the innovative to the odd.

This year’s show was notable for Apple’s first appearance in 28 years, with Jane Horvath, senior director of global privacy speaking on a panel discussing consumer privacy alongside counterparts from Facebook and Procter & Gamble.

It also featured the US President’s daughter (and adviser) Ivanka Trump who discussed in a keynote slot on digital skills and data. Her appearance attracted critics who thought other women had more expertise in the field. On stage, the US president’s daughter suggested Americans’ CV data should be stored and updated on their phones as a matter of course, to make it easier for them to apply for jobs.

Quibi, short for “Quick Bites,” is a mobile video service run by CEO Meg Whitman (ex-CEO of Hewlett-Packard) and Jeffrey Katzenberg (ex-chair of Walt Disney Studios). Expected to roll out in April. Already, Quibi says it has sold $150 million of ads, putting it in a strong position ahead of launch. The firm intends to charge $4.99 (£3.80) per month for basic access and $7.99 for an ad-free version. The stars involved in the new service include Steven Spielberg, Sam Raimi and Guillermo del Toro. The services will include episodic series, and also movies – which will be divided up into chapters. Steven Spielberg will create a horror series, After Dark, that can only be viewed after sunset. To do this, the app will check the user’s location and the local time to check it is indeed dark where they are. Launched at a presentation at CES 2020, the creator’s showcased a feature called Turnstile, which allows viewers to keep the image full-screen, whether they hold their phone in landscape or portrait mode. Content creators have framed their shots so that the action suits either aspect ratio, and in some cases have used the facility to reveal a different point-of-view. For instance, one show features a traditional perspective when the picture is widescreen but shows a view of the protagonist’s phone when held vertical.

Samsung showed off a yellow tennis ball-like robot named Ballie that acts as your personal assistant, following you around the house and helping with chores. In the future, for example, Samsung says its built-in camera can detect spills and tell your smart vacuum to go clean them up. Or, if an elderly person falls, Ballie can roll over so they can ask it to call 911. Lovot, a companion robot, was also a hit at CES. It’s cute, gives hugs and, with the camera on top of its head, doubles as a home monitoring system.

Global beauty brand L’Oréal unveiled Perso, an artificial intelligence (AI)-fuelled skincare device. Described as “an AI-powered at-home system that represents the ultimate in beauty personalisation”, Perso features a four-step process to deliver on-the-spot skincare and cosmetic formulas that reportedly optimise for increasing levels of personalisation over time. Perso can also create custom formulas for lipstick and foundation, but these capabilities will be unveiled and made available for consumers at a later date. Guive Balooch, head of L’Oréal’s technology incubator, noted: “We know that customisation relies on information about your unique skin and personal preferences as well as your environment; this technology accounts for that. “Perso uses AI to optimise the formulas and actually gets smarter as you use it,” he added. L’Oréal said Perso will be launched in partnership with one of its leading skincare brands in 2021.

Valeo unveiled its autonomous, electric delivery droid, developed in partnership with ecommerce platform Meituan Dianping, which operates popular food delivery service Meituan Waimai. The two groups signed a strategic cooperation agreement at last year’s CES to develop a last-mile autonomous delivery solution. The droid can deliver up to 17 meals per trip, autonomously negotiating dense and complex urban environments at about 12 km/h without generating any pollutant emissions. With a range of around 100km, this prototype gives us a glimpse of what home delivery could look like in the near future, especially in the ever‑growing number of zero-emissions zones that are being created around the world. A connected delivery locker allows for safe delivery to the end customer, who can book through a smartphone application.

A new “species” of virtual assistants with Neon

Samsung-backed Neon showed off “artificial humans” promising incredibly life-like CGI creations will interact with users in more powerful ways than existing home assistants, such as Alexa and Google Assistant. The complementary companions can learn your likes and dislikes, such as if you prefer plain or pepperoni pizza, and ultimately become your friends. These Neon avatars will be interactive on smartphones or on larger screens, such as in stores. They’re expected to launch later this year, possibly with a subscription model.

Robokitties are all the rage

A startup called Elephant Robotics developed a robotic pet cat called MarsCat. The bionic feline can walk, stretch, play with toys, avoid obstacles and bite its nails. It can also recognize human faces and knows 20 commands and phrases, including “sit” and “come here.” It may be the only time a cat will listen to you. Robotic cats were all the rage this year, with Yukai Engineering unveiling a headless robot kitten intended for people who want to own a pet, but can’t because of allergies or restrictions where they live. The Petit Qoobo by Yukai Engineering is a headless cat robot that is soft, squeezable and even purrs. It was created to be a comforting hugging companion for those that can’t have pets, such as those in nursing homes or care facilities.

Uber and Hyundai unveiled a flying taxi that may eventually transform your ridesharing trips. Thefirst prototype will be ready in 2023, according to a Hyundai spokesperson. In addition, the Manta5 Hydrofoil Bike, one part bike, one part plane, is designed to mimic cycling, but on water. The product has been in development for eight years.

The AT.Wallet, a fingerprint-enabled cryptocurrency wallet from AuthenTrend has been honoured with an innovation award in the cybersecurity and personal privacy category at CES 2020. The credit card-style cold storage wallet uses biometrics for wallet login and transactions, and also features a standalone mode with e-ink for asset and transaction QR codes, Bluetooth LE mode for its iOS and Android app, and USB docking for transactions through Windows or Mac browsers.

The biggest news of CES 2020 was that Apple made its first official appearance at CES after 28 years. Jane Horvath, senior director of global privacy gave a keynote speech and spoke on a panel discussing consumer privacy alongside counterparts from Facebook (Erin Egan) and Procter & Gamble (Susan Shook) as well as a commissioner from the Federal Trade Commission, Rebecca Slaughter. The tech giant didn’t push any product launches though, but Apple partners demonstrated Siri-enabled products for the home.

When attendees registered at CES this year, there was a new option to confirm they are who they say they are: facial recognition. Certain CES check-in locations had a camera set up that snapped a person’s photo and automatically match it to the photo they used to register. The tech was opt-in and an example of how the conference and its exhibitors are trying to give the technology a more consumer-friendly image. Facial-detection technology has caused a lot of controversy and concerns over privacy and bias. It’s already in use at airports and by law enforcement and included in other surveillance systems. Now the same companies making those systems want it to be embraced as a fun, user-friendly technology that makes tasks easier. Cybersecurity and personal privacy was added as an award category last year, and the Consumer Tech Association that puts on CES has been challenged by balancing different concerns. A large number of facial recognition companies were at the show, along with eight other surveillance technology companies. Bosch put facial recognition at the forefront of their offerings this year.

Samsung unveiled a new TV model called Sero, which features a display that can rotate either horizontally or vertically. Samsung is betting on a unique concept specifically designed with smartphone users in mind.

The company’s robot, controlled by an app, attempts to solve an age-old problem by bringing you a new roll of toilet paper when you run out. You connect to the bot with a Bluetooth connection, then summon the TP butler with your phone. Charmin also wants to keep you entertained while you’re on the porcelain throne. With V.I. Pee you can have a full A.I. experience while you go using an Oculus Rift S VR Helmet.

After a very public debacle last year, where it awarded, revoked, and then reinstated an “honoree designation” for a sex tech company, it seems CES has begrudgingly embraced the pleasure industry. The event organises its thousands of exhibitors into categories like smart home, augmented reality, transportation — and the fast-growing health and wellness segment. And for the first time in its 52 years, the conference will allow sex-toy companies to exhibit on the show floor as part of that group, including a multitasking bed for sex and a number of “smart” and Internet-connected vibrators. The show’s organisers changed their policy after some drama at last year’s event. Sex-toy company Lora DiCarlo won a CES innovation award, but it was later taken away for being against CES policies prohibiting “immoral, obscene, indecent, profane” products. Not all vices are getting an invite. Cannabis and tobacco technology, such as vaporisers, is still forbidden at the show.

Lumi by Pampers Connected Care System is a baby monitoring system that includes a sensor that attaches to an infant’s diaper and works in conjunction with a smart camera to track sleeping habits. It also alerts parents when the diaper has been soiled.