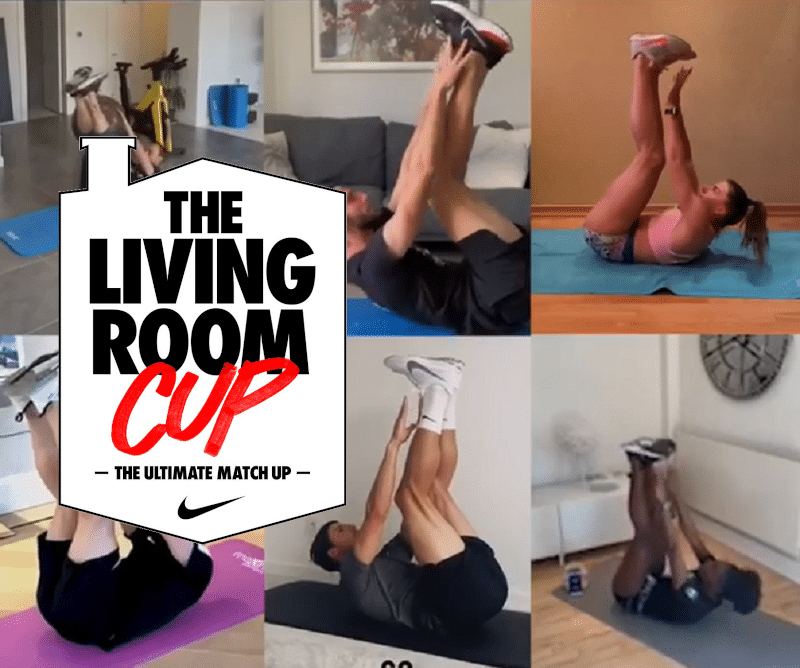 With lockdown policies in effect amid Covid-19, Nike has launched “Living Room Cup,” a digital workout series that offers those at home a new space to compete against Nike pro athletes through weekly fitness challenges.

Dubbed a ‘digital workout series’, it was kicked off by Ronaldo through instagram on Sunday 5th April. Ronaldo gave his followers one week to beat his best mark, then he’ll pass the competition over to the next athlete for a new challenge.

After finishing 142 reps in just 45 seconds, Ronaldo invited fans and followers to attempt to beat his “core crusher record” in one week. Thousands took part and the subsequent Instagram post was viewed 10 million times in a week.

Every challenge provides competition that “defines the world of sport,” as players can share their results on Instagram using the hashtags #playinside and #thelivingroomcup.

Another week of playing inside and staying active. Thanks to everyone for trying to beat me 😉 maybe next time! Over to you @bebe_vio. Get ready! #livingroomcup #playinside

Throughout the series, Nike will continue to enlist famous ambassadors for those self-isolating at home to challenge. In addition, Nike’s training app includes weekly workouts that are specially designed to prepare the player for each week’s challenge.

The challegne forms part of Nike’s new ‘Play for the World’ campaign, created by Wieden + Kennedy, pushed the message that we must all do our bit for the world and ‘play inside’. The first ad in the campaign, ‘You Can’t Stop Us’, included images and video footage of people working out in their homes, be it in their kitchens, bathrooms, bedrooms, or basements.

As well as a few famous faces, including basketball star LeBron James and volleyballer Sara Hughes, the ad featured lesser-known and unknown fitness fans to reinforce the sense that we are all in it together.