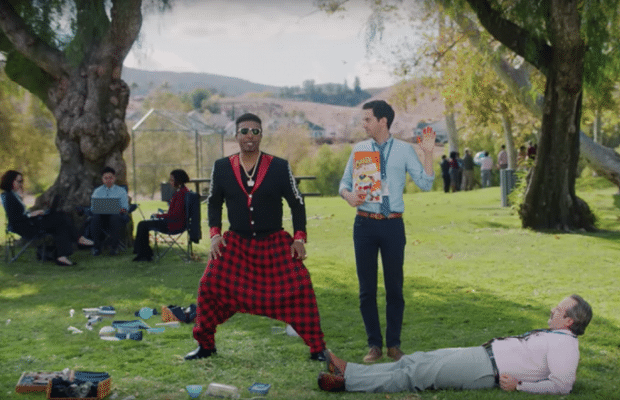 The Super Bowl is not only one of the biggest sporting events of the year, it's also one of the biggest ad events, with brands battling for both TV viewers and social media clicks. We take a look at yesterday's big game to pick the best (and worst) ads of the night.

In a time of political division in America, with an impeachemnt trial and upcoming presidential election this year, the bulk of this year’s Super Bowl LIV commercials dodged contoversy and leaned heavily toward the playful and silly.

The game was a thriller, with the Kansas City Chiefs produce stunning fourth-quarter comeback to beat San Francisco 49ers. Off the field, the ads during the breaks managed to create more buzz on social media.

Securing a half-time TV ad slot during the Super Bowl is one of the most coveted opportunities in advertising, with a captive audience of an estimated 120 million people tuning in. Despite a 30-second slot costing a staggering £5.6m, many brands look to spend an additional quarter of their investment on marketing their ad to ensure that it’s seen as widely as possible, amplified by social media.

Alexa goes back in time with Ellen

Amazon continued it’s trend for asking “What if…?” when it comes to its voice assistant Alexa. This time, real-life couple Ellen Degeneres and Portia De Rossi ask “What do you think people did before Alexa”? This leads to a humorous montage of historical situations where actual humans (whose names start with the letters A and L) respond to questions or obey commands that are similar to things you’d ask Alexa to do. The ad ends with cheeky (and topical) joke on the Watergate scandal.

Walmart launched its first-ever Super Bowl TV commercial to highlight the ever growing importance of its order pickup service. The ad shows characters from all across the universe making food runs in between their intergalactic adventures. Among numerous franchise appearances, you will see The Enterprise from Star Trek, Flash Gordon, Billand Ted, The Lego Movie, Guardians of the Galaxy, Toy Story, Men In Black, “Blade Runner, Mars Attacks and even a quick cameo from two Star Wars characters from The Rise of Skywalker.”

Bill Murray endures Groundhog Day all over again with Jeep

With some help from the Jeep Gladiator pickup, Bill Murray reprised his roll in classic timeloop film Groundhog Day. A couple of the film’s original characters also make a surprise reprisal, too. Clocking in at just about a minute, the ad shows Murray wake up at 6 a.m. to the tune of Sonny and Cher’s “I Got You Babe” and then head off into the snowy day, before he rips off in the rugged vehicle – with the famed groundhog.

Google took a simple idea and turned it into something heartbreaking. A POV shot of an elderely man searching “How to not forget,” an elderly man issues a number of commands to his Google assistant. He asks the device to show him photos of his late wife Loretta, and to remember details like “she loved going to Alaska” and “she always snorted when she laughed.” Google’s chief marketing officer wrote that the commercial was inspired by a true story, and voiced by a Google employee’s 85-year-old grandfather. At the end, the device scrolls a list of details the man has asked it to remember, such as “Loretta’s favorite flowers were tulips,” and “Loretta always said, don’t miss me too much,” interspersed with old photos and videos of Loretta’s life. It ends with the man saying, “Remember, I’m the luckiest man in the world,” and no, those tears weren’t from the onions you were chopping for your halftime guacamole. Sure, there were a few people who couldn’t help but make jokes about how Google sold the late Loretta’s personal data to advertisers. But for many, the commercial reminded them of their parents’ and grandparents’ love stories, and the toll that Alzheimer’s and dementia take.

Much like previous ‘It’s a Tide Ad’ spots, the washing brand used this year’s spot to make many knowing nods to other brands. The best time to do laundry is later — but when is later? Charlie Day tries to figure it out while Emily Hampshire knows new Tide Power Pods will get it out whenever she gets around to it. Like later. But how much later? The creative draws in Wonder Woman, Bud Knight and The Masked Singer.

First Baby Groot. Then Baby Yoda. Now… Baby Peanut? Snack brand Planters killed off Mr. Peanut a few weeks ago, but in its new Super Bowl spot, he’s reborn at Baby Peanut After the debut of Baby Nut during the Super Bowl, the verified @MrPeanut account retweeted memes from separate accounts about Baby Nut. For most viral moments this wouldn’t be surprising, but upon further inspection, the accounts that were retweeted were created in January, before the public knew about Baby Nut — suggesting that they were part of the ad campaign.

Hyundai aired a 60-second Super Bowl spot for the updated Sonata during the first quarter of the game that uses a roster of Boston-connected celebrities to tout the car’s “smaht pahk” feature. The spot depicts Rachel Dratch and Chris Evans watching someone fail at parking between a monster truck and a big SUV. Along comes John Krasinski in a Sonata, who pulls alongside the coveted spot, hops out and uses the car’s remote smart parking assist function, or “smart park” to have the car DIY. The actors have fun with the setting, over-enunciating the distinctive vowels of the classic Boston accent. “The car is the focus of our celebrities’ attention,” said Barney Goldberg, executive creative director at Hyundai agency INNOCEAN USA, in Huntington Beach, Calif. “It is a product demonstration, but it feels natural, too.” The idea came about as it became clear “remote smart parking assist” is a mouthful to promote. As is his practice for Hyundai Super Bowl advertising, Goldberg opened up concept-pitching to the entire agency.

Ricky and Morty get trapped in Pringles commercial

Adult Swim’s cult favorites Rick and Morty get ‘trapped’ in this Pringles commercial, staying true to the cartoon’s existential humour. In the full animated 30-second spot, a Pringles robot disguised as Morty appears overly enthusiastic about the Spicy Barbecue Pizza stack, made using Pringles Pizza, Barbeque and Jalapeno crisps. Rick immediately catches on to his grandson’s bizarrely out-of-character corporate jargon, unmasks the Mortybot and comes to the startling realization that they’re trapped inside a Pringles commercial and can’t get out. Last week’s viral teaser generated more than 1.5 million views across Rick and Morty’s social channels, showing there’s a hunger for more from the property.

This Cheetos popcorn commercial stars MC Hammer performing his “Can’t Touch This” to poke fun at the crusty orange fingers people get when they eat a Cheetos product. They literally can’t touch anything lest they smear their orange grease fingers all over important paperwork, someone else’s baby (with a Hammer head), someone lift weights and someone doing a trust fall at a work picnic. MC Hammer magically pops out of a picnic basket with his signature pants growing out of the picnic blanket.

Martin Scorsese and Jonah Hill feature in this commercial, where Scorsese has arrived at a party and Hill hasn’t turned up yet. Thankfully, after giving Scorsese the maddening, delayed three blinking dots in iMessage (which are personified by rapper YBN Cordae), Jonah Hill gets himself a Coca-Cola Energy and he’s good to go.

Mountain Dew showcased it’s new MTN Dew Zero Sugar drink in a 30-second commercial touting the tagline ‘As Good As the Original, Maybe Even Better,’ and puts a twist on a scene from the classic Warner Bros. Pictures horror film, The Shining. The ad features actors, Bryan Cranston and Tracee Ellis Ross in a fun re-imagination of the famous “Here’s Johnny” scene from the film. Surrounding the big game, MTN Dew brought elements from the TV commercial to consumers through Instagram, Snapchat and TikTok.

From inapprorpiate parent texts to devices that listen to your conversations, how do you solve the world’s most annoying problems,? Snickers social media campaign seemed to suggest digging a big hole, which culminated in this epic Super Bowl ad. The chocolate brand released its new Super Bowl LIV ad, including a special long-form version on the brand’s YouTube page. In the iconic brand’s signature humour, the ad declares “the world is out-of-sorts” and presents an absurdly satisfying solution to fix it. As a crowd gathers in song to watch, a giant Snickers is “fed” to the Earth in a grand attempt to fix the world. The spot ends with some evidence that SNICKERS’ plan just may be working. “This new ad marks the latest evolution of our award-winning ‘You’re Not You’ campaign,” said Josh Olken, brand director, Snickers. “Since the first Super Bowl spot 10 years ago, we’ve shown the power of Snickers to satisfy when you’re out of sorts. Our attempt to ‘fix the world’ is a new angle, and our biggest yet: When the world itself is out of sorts, maybe it just needs a Snickers.”