Apple TV goes live: Can it take on Netflix? 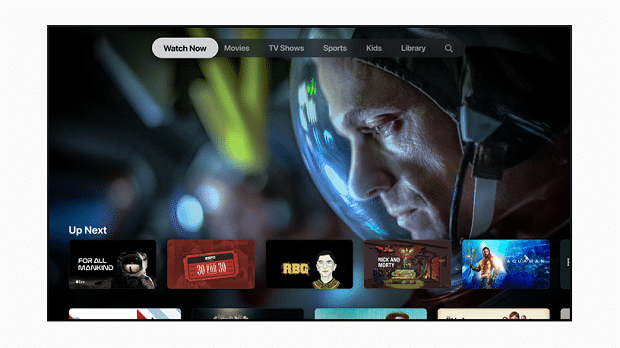 Apple TV+ has launched, signalling the company’s entry into the VOD market and its competition with the likes of Netflix and Amazon Prime.

The long-awaited streaming video service went live early on Friday morning, priced at $4.99-per-month featuring original TV shows and movies bankrolled by Apple. The service is launching in over 100 countries and regions, according to Apple.

It can be accessed through the pre-installed TV app on Apple’s devices, including the iPhone and iPad, as well as through apps for various smart TVs and set-top boxes made by companies like Roku, Samsung and Amazon. Apple is also streaming its shows on its website for people using Safari, Firefox or Chrome browsers.

The launch of Apple TV+ is a critical moment for Apple as it strives to sell content and services to its 900 million iPhone users, instead of just selling them computer hardware and software.

Apple Originals available now through Apple TV+ include “The Morning Show,” “See” and “For All Mankind,” all of which have debuted their first three episodes and will release a new episode weekly every Friday on the Apple TV app. Additionally, all episodes of “Dickinson,” as well as kids and family shows “Helpsters,” “Snoopy in Space” and “Ghostwriter,” are available to watch now. Customers can also enjoy the documentary film “The Elephant Queen,” as well as the first installment of “Oprah’s Book Club,” featuring Oprah Winfrey in conversation with Ta-Nehisi Coates discussing his novel “The Water Dancer.”

“Audiences in over 100 countries and regions can now enjoy Apple TV+, home to an all-original lineup of powerful shows and movies from today’s greatest storytellers,” said Eddy Cue, Apple’s senior vice president of Internet Software and Services. “It was important for us to make it easy for everyone to watch across all their favorite screens, so Apple TV+ is the most broadly available Apple service ever from day one.”

Luke Bozeat, COO, MediaCom UK argues that with all the new entrants in the market, the quality of content will be the key differentiator in which service comes out the most successful.

“With the launch of Apple TV+ today, Apple is entering the VOD market armed with a lower price point, a suite of exclusive shows and investment that rivals some of the largest film studios to create original programming,” Bozeat said.

“All of this is clearly an attempt to not only lock consumers into the Apple ecosystem and grow subscriber revenues through its captive audience, but also create a true competitor to the likes of Netflix and Amazon Prime.

“However, with so many different services emerging – with Disney+, which launches later in November, Britbox, HBO Max and NBCUniversal all vying for a share of our screen time – not only is Netflix’s dominance under threat, but consumers must carefully pick which service best suits their needs.

“The key differentiator now will be content, and many content owners have taken notice of this. Many have already reclaimed rights to shows that Netflix has historically profited from, and gaining exclusivity to Seinfeld won’t have made up for its loss of Friends to WarnerMedia and The Office to NBCUniversal. The challenge the streaming giants now face is to ensure their content isn’t a case of quantity over quality. Apple TV+ has seen where Netflix has struggled, and has the opportunity to now create stories and content which will engage viewers and potentially capture subscribers from the service.”