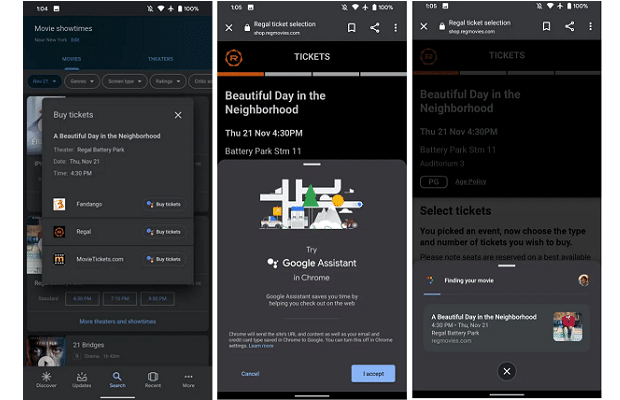 Google is expanding its Duplex service, moving "beyond voice” and coming to the web, letting users buy movie tickets with a few commands.

After publicly testing in late September, Duplex is officially launching today as “Google Assistant in Chrome” to help you buy movie tickets.

Users can buy tickets with Duplex by issuing a command such as “Hey Google, showtimes for [movie] in Phoenix this weekend.”

Google will then offer a selection of cinemas to choose from and a selection of showing times, once you’ve picked your options just hit “Buy tickets”. From there you’ll be taken to the ticket purchase page which Duplex will be able to manage on its own.

The new feature is compatible with 70 cinemas and ticketing services including Fandango, MovieTickets.com, AMC, and MJR Theaters in the US, and ODEON in the UK.

It’s not quite clear whether the feature is restricted to these two countries or if it’s available in other countries too, the number of partners does suggest that some other countries will be able to use the technology too.

Duplex for the web will not be restricted to buying movie tickets. In an upcoming update, which Google provides no timescale for, users will be able to use Duplex to place orders for car rentals too.