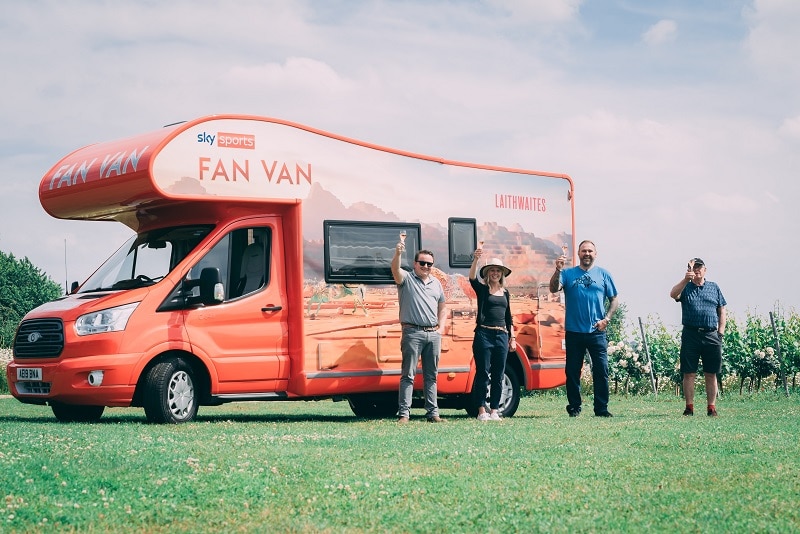 Wine retailer Laithwaites has struck a partnership with Sky Sports and its ‘Quinnebago’ Fan Van tour, for the British & Irish Lions Series in South Africa.

With the Series being played behind closed doors and supporters unable to travel to South Africa, Sky Sports’ roving presenter Scott Quinnell and his trusty producers “Legs” and “Bear” will be travelling the length and breadth of the UK to hear the stories of fans cheering on the touring side from home.

The partnership also includes a Sky AdVance package that will allow Laithwaites to engage with Rugby Union TV viewers across the web, to promote the Sky Sports Fan Van.

Laithwaites will further extend their reach amongst passionate Lions supporters through the sponsorship of the hugely popular Sky produced ‘Will Greenwood’s podcast’, as Will and the team create a special Lions edition for the duration of the Tour.

The Fan Van, also known as the ‘Quinnebago’ has a new fresh look, wrapped in Sky Sports and Laithwaites livery, as Quinnell starts his journey at Henry Laithwaite’s Harrow & Hope vineyard in Marlow before heading down to Devon & Cornwall, then travelling north to Scotland, meeting Lions legends along the way. From Scotland, the van will then head to Northern Ireland, before finishing in Cardiff ahead of the 3rd Test Match.

As well as sponsoring the Fan Van’s digital and social content, Laithwaites will also be delivering several unique tasting experiences for Quinnell and his former teammates after a long day on the road. They will also be rewarding fans along the way with a number of prize bundles, including some of their leading South African wines.

“We’re really excited to be working with Sky Sports to support the Fan Van. Our founder Tony Laithwaite started the business from a van, so I’m sure he’ll be on hand to offer his support to Scott!” said Rupert Elwood, Marketing Director, Laithwaites. “It’s a huge shame fans are unable travel to South Africa, but we are looking to bring a taste of the country to fans supporting the Lions at home on Sky Sports. We are also supporting our incredible South African wine growers, who are experiencing unprecedented challenges following the recent announcement of the fourth alcohol ban as a result of the pandemic.”

Sarah Jones, Director of Planning at Sky Media said: “We are delighted to be working with Laithwaites as the Fan Van returns to celebrate the Lions Tour of South Africa. From co-branding of the van to creating engaging content with renowned Sky talent, it’s great to see such an exciting and creative partnership hit the road.”