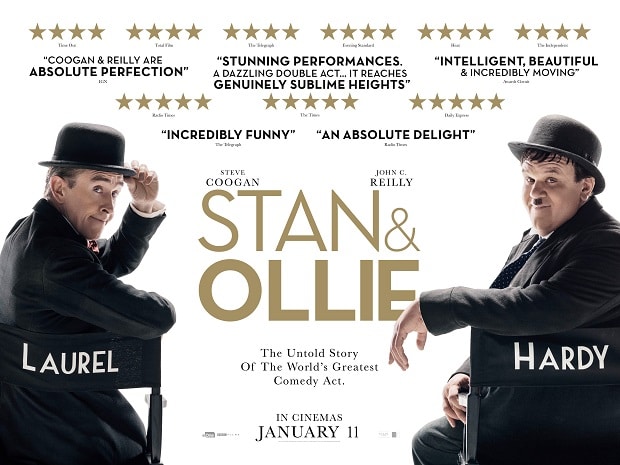 The Evening Standard and eOne has partnered to promote the debut BAFTA nominated film, Stan & Ollie.

The campaign will see Evening Standard vendors dressed in iconic Laurel and Hardly bowler hats across 100 London locations. This will be supported by 500 branded bills and trolley posters advertising the news of the recent BAFTA nomination.

Londoners travelling through Charing Cross, Covent Garden or Embankment will also see exclusive snippets of the film where Steve Coogan and John C. Reilly recreate the memorable dance from Way Out West projected on building facades.

The campaign across print and outdoor will see 100 ES vendors sharing the evening’s papers dressed in iconic Laurel and Hardy bowler hats and branded t-shirts across key locations with the highest footfall in central London, including Waterloo, Oxford Circus and Leicester Square. In addition, the vendors will be supported by 500 branded bills and trolley posters featuring the news of its recent BAFTA nominations.

Londoners walking through Charing Cross, Covent Garden or Embankment will also be immersed into the Laurel and Hardy world with snippets of exclusive footage from Stan & Ollie including the recreation of the memorable dance from Way Out West projected onto three iconic London buildings.

These outdoor experiential stunts will compliment the exclusive front page advertising to further build brand awareness amongst the ES’ affluent and culture-loving audience.

Faith Taylor, Senior Marketing Manager at Entertainment One, said, “We are very pleased to work closely with the Evening Standard to celebrate the release of Stan & Ollie, and the much-anticipated return of Laurel and Hardy (played by Steve Coogan and John C. Reilly) to UK cinemas this weekend. Following the iconic comedy duo’s successful performances in the West End over 60 years ago, it is a fitting welcome to takeover these London landmarks. The film, along with our bowler-hatted Evening Standard vendors, are guaranteed to put a smile on the face of anyone with a touch of the January blues!”

Jon O’Donnell, Group Commercial Director at ESI Media, said, “We’re delighted to be working with eOne on its forthcoming launch for the film Stan & Ollie. Our unique on-street distribution network of the Evening Standard means that we are able to marry our fantastic print and digital content with bringing to life both the spirit and iconography of the film onto London’s streets. We think our movie loving audiences will be ‘bowled’ over by the work (ba boom tish)..”