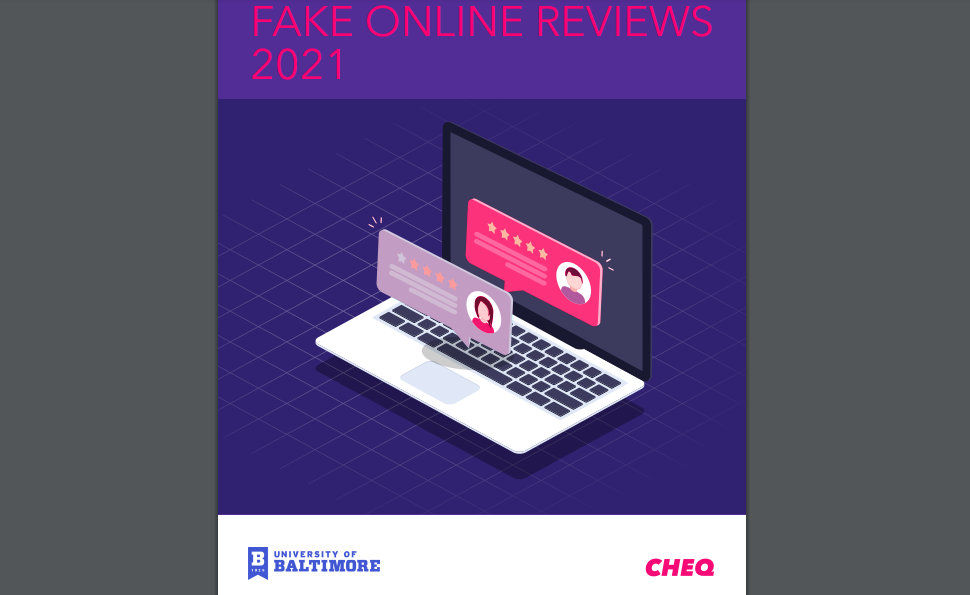 Fake Online reviews will be responsible for $28 billion of US ecommerce purchases made in 2021, an economic study by CHEQ and the University of Baltimore has revealed. These fake reviews, read by US online shoppers, will influence decisions to buy goods and services, including electronics, travel, and fashion purchases, adversely impacting consumer decisions, the […]

Fake Online reviews will be responsible for $28 billion of US ecommerce purchases made in 2021, an economic study by CHEQ and the University of Baltimore has revealed.

These fake reviews, read by US online shoppers, will influence decisions to buy goods and services, including electronics, travel, and fashion purchases, adversely impacting consumer decisions, the study finds [full report in link below].
CHEQ, the leader in customer acquisition security (CAS), collaborated on the report with economist Professor Roberto Cavazos, Executive in Residence in the University of Baltimore’s Merrick School of Business.

The study finds that both legitimate and fake online reviews will overall influence $791 billion of US ecommerce spend in 2021 with 89% of consumers relying on consumer reviews to buy goods and services. Using official figures and analysis of the world’s leading ecommerce and review sites, the study found that at least 4% of all reviews posted are fake, creating $28 billion in sales directly influenced by fake reviews.

Using the latest economic analysis, proprietary CHEQ data, and expert interviews, the study also breaks down the direct impact of the $28 billion US ecommerce impact on major U.S. e-commerce sectors as follows:

Alongside the direct economic costs of fake online reviews, the report reveals the growing price paid by businesses and e-commerce sites to counter a rising tide of fake reviews including competitor and bot attacks. This also includes widespread “indirect costs” faced by businesses including fast-rising court enforcement, corporate time, and the long-term lack of trust hurting future buying decisions.

The report also warns that although fake reviews are commonly done by humans, bot-filled reviews have enjoyed a resurgence on leading e-commerce sites. Increasingly landing through customer-acquisition campaigns, bots enter review pages and fill in reviews.

CHEQ founder and CEO Guy Tytunovich added: “Core to tackling this challenge is the continuing efforts of leading e-commerce players and online platforms, alongside wider innovation and cybersecurity checks to ensure sophisticated detection of the most extreme attacks. It has become a clear economic necessity to act against fake online reviews and further diminish the reach of bad actors undermining online buying decisions.”