Twitter has flagged a tweet from Donald Trump for the first time in its history, leading to the US President criticising the social media platform of "interfering in the 2020 presidential election". 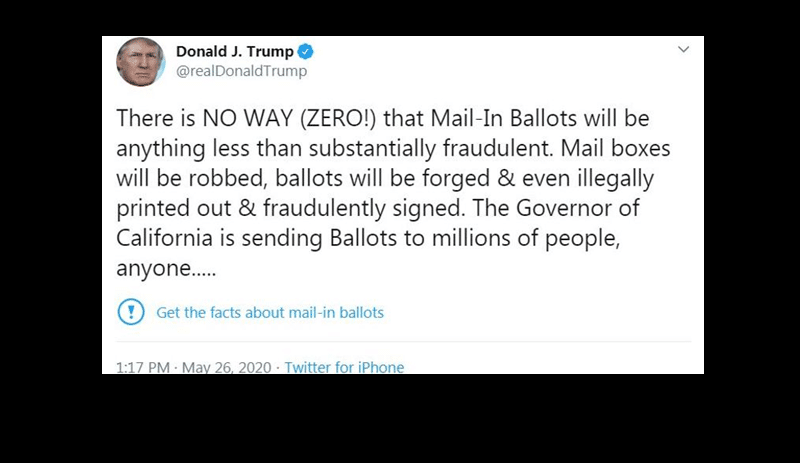 Trump had earlier tweeted that mail-in ballots were "fraudulent" and said "mail boxes will be robbed".

Under the tweets, there is now a link reading "Get the facts about mail-in ballots" that takes users to a Twitter "moments" page with fact checks and news stories about Mr Trump's unsubstantiated claims.

There is also a "what you need to know" box highlighting three separate claims about postal voting by the president and why they are incorrect.

There is NO WAY (ZERO!) that Mail-In Ballots will be anything less than substantially fraudulent. Mail boxes will be robbed, ballots will be forged & even illegally printed out & fraudulently signed. The Governor of California is sending Ballots to millions of people, anyone.....

Trump reacted by tweeting: "Twitter is now interfering in the 2020 Presidential Election.

"They are saying my statement on mail-in ballots, which will lead to massive corruption and fraud, is incorrect, based on fact-checking by Fake News CNN and the Amazon Washington Post.”

It took 10 hours, Twitter added a link to that tweet with these words: "Get the facts about mail-in ballots."

That link takes users to a separate page populated by news articles and tweets from journalists and experts refuting parts of the president's claims.

It features bullet points pushing back on the president's claims about mail-in voting:

"Partnering with biased fake news 'fact checkers' is a smoke screen to lend Twitter's obvious political tactics false credibility. There are many reasons we pulled all our advertising from Twitter months ago, and clear political bias is one of them," Mr Parscale tweeted.

There are many reasons we pulled all our advertising from Twitter months ago, and clear political bias is one of them.https://t.co/oqgTq32KxS