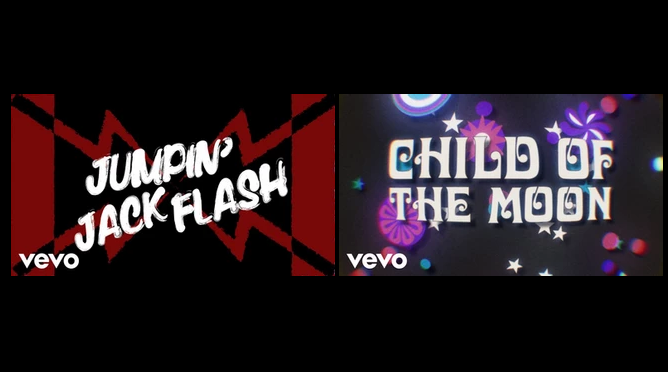 The Rolling Stones have released a new lyric video for their iconic 1968 single, Jumpin’ Jack Flash. To commemorate 53 years, both Jack Flash and its B-Side, Child Of The Moon, have been given a visual revamp.

The pair of videos were conceived and created by Yes Please Productions, the design studio responsible for all of the Stones’ lyric videos since the reissue of Their Satanic Majesties Request in 2017.

Jumpin’ Jack Flash’s visualiser opens with red, white and black geometric shapes whirring to that unmistakable Keith Richards riff, different objects moving in and out of the screen to every bar of music – diamonds, circles and clean lines soon make way for a kaleidoscopic whir just in time for the maracas to make themselves at home.

The primary colour palette, paired with the brush script lyrics, sets out to convey the raw, stripped back nature of the Stones hit. A vintage grain and film texture is laid over the video, adding to the retro feel.

Tom Readdy, creative director at Yes Please Productions, adds: “Lyric videos are an integral part of the marketing mix in the music industry, especially for catalogue artists, but they’re so often treated as an afterthought. The excitement and rush of the song is something that should be conveyed in the lyric video, just as it would in traditional promo – no music fan is going wild over something they could’ve done themselves. Our videos will be the visual representation of these iconic songs for the foreseeable future, and that’s a huge honour as well as a great responsibility!”

Child Of The Moon opts for a more subdued feel, inspired by the natural landscape and elements from the track’s original, acid-tinged 1968 promo video, directed by Michael Lindsay-Hogg. Yes Please Productions lifted the typeface for the new lyric video from the original 7” single, ensuring the song’s psychedelic, retro tones were conveyed faithfully in 2021. This ‘60s-inspired theme is furthered with bespoke illustrations of flowers, leaves and patterns that grow in and around the typeface.

Jumpin’ Jack Flash was released as a non-album 7” single on May 24th, 1968. Yes Please Productions’ lyric videos for The Rolling Stones have helped support a reignited interest in the legendary band’s work within younger generations, thanks to millions of YouTube views and Spotify visualisers.

Lucy Dawkins, creative director at Yes Please Productions, adds: “Over the last four years, we’ve made more than 100 lyric videos for the Stones – it’s always a joy to dig back into the catalogue and find new ways of interpreting the classics. Jumpin’ Jack Flash’s rock ‘n’ roll danger and Child Of The Moon’s psychedelic undertones always played well off one another on the 7”, and putting that dichotomy to film was one of the more rewarding moments we’ve had with the Stones’ work.”