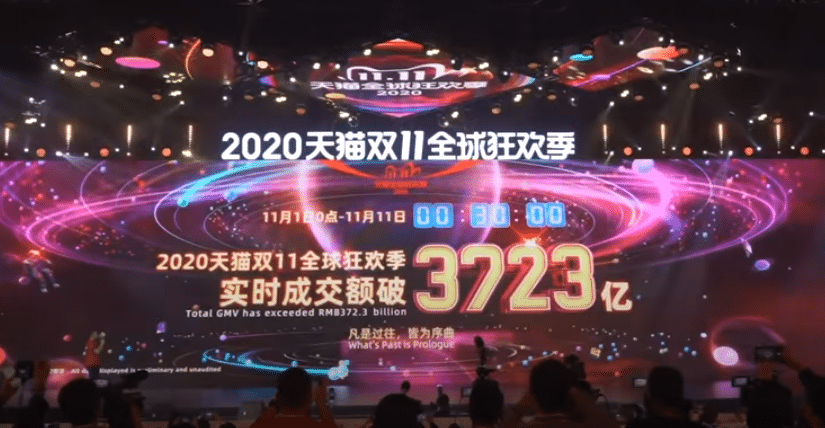 China’s Alibaba has revealed that orders on its ecommerce platforms during the Singles’ Day shopping extravaganza hit a record 498.2 billion yuan ($75.1bn).

The world’s biggest sales event – eclipsing Black Friday and Cyber Monday in the United States – spanned four main days this year.
Singles’ Day, also known as Double 11, is the world’s biggest online sales date, outstripping Black Friday and Cyber Monday sales combined.
It was originally a novelty student event to celebrate being single, but has since grown into a month-long online shopping festival that peaks with a 24-hour event on 11 November.

Now in its 12th year, the event sees Alibaba offer large discounts in a bid to drum up hype and excitement among consumers.
The event has been boosted by more domestic shopping demand but Alibaba shares fell as China looked at enforcing monopoly laws.

Yet at the same time Alibaba shares plunged 8% with rival JD.com seeing a similar slump after China’s authorities set out proposals to tackle monopolies in the sector.

The performance of the mammoth sales festival – first launched by Alibaba in 2009 – has become indicative of the strength of the Chinese consumer economy.

Alibaba and JD.com said the United States was the top seller of goods to China during the Singles’ Day shopping extravaganza that generated about $116 billion in merchandise volume for the pair.

Alibaba’s Hong Kong-listed stock, which took a beating when regulators scuppered the listing of fintech affiliate Ant Group, dropped another 10% on Wednesday. It was up 3% around midday Thursday.

Anthony Botibol, VP of Marketing at customer data platform provider BlueVenn,said: “Singles’ Day marks another key event in the retail calendar for what will be a crucial ‘golden quarter’ for many brands. It provides an opportunity for retailers to regain lost revenue in a year that has been heavily impacted by Covid-19. However, as brands engage with sales events like Singles’ Day it’s important that brands understand how to differentiate from those hunting for sales and those buyers who can become long-term loyal customers. Doing so will ensure sustainability and success going forward. Much of this depends on gathering insightful data on consumers in order to understand a customer’s interaction with a brand previously and then personalising the shopping experience; however, the reality is many brands aren’t able to join their online and offline experiences together in order to master this.

“As shopping behaviours change on a very personal and individual level, it is paramount that brands adapt to the rise of the hybrid customer. It is estimated that more people will be purchasing online due to lockdown restrictions, however brands need to differentiate which customer may have traditionally been an offline customer and which customers are regular online shoppers. Mis-targeting a consumer who is perhaps shopping online for the first time due to lockdown era shows the need for better data and segmentation to avoid mishaps in marketing and communications. Those brands who have a hybrid mindset can better mitigate buyer unpredictability and have the best chance of turning one-stop shoppers into returning loyal shoppers.”