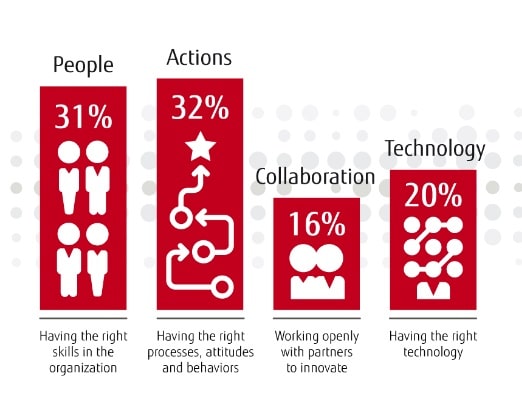 Lack of direction behind digital transformation is costing retailers dearly, as almost three quarters (74 per cent) admit to undertaking projects not linked to the overarching business strategy.

Importantly, almost six in ten (58 per cent) retailers say that this cost has put them off pursuing digital projects in the future, according to Fujitsu’s Digital Transformation PACT Report.

With digital disruptors entering the market, retailers acknowledge that they need to digitally transform and agree that the ability to change will be crucial to their business’ survival in the next five years (84 per cent). In fact, 16 per cent named new entrants into the retail space as the most influential factor driving their digital transformation. However, at present over half (53 per cent) say that they are facing challenges including a clear lack of digital skills in the organisation. All of the retailers surveyed (100 per cent) admitted their customers expect them to be more digital.

“Retailers face pressures from customers, competitors and new digital disruptors entering the market, which has them running from all sides to try and compete. However, many retailers have undertaken projects that have ultimately failed. This has so far cost them a significant amount of money and subsequently left them with a reluctance to pursue new projects. The number of failed and cancelled projects should be nearly zero if they used modern approaches, but what’s been made evident is that they are lacking the right components to make their digital transformation plans a success” says Jat Sahi, Digital Lead Retail, EMEIA at Fujitsu.

According to Fujitsu’s study, retailers need to balance the four elements of People, Action, Collaboration and Technology to ensure digital transformation success. Only by focusing on all four strategic elements – the Digital Transformation PACT – will retailers be able to innovate successfully and see the benefits to their bottom line, employees and their customers.

When it comes to retailers’ organisations, 95 per cent agree that upskilling existing staff will be vital to their success in the next three years. Retailers are undertaking a number of initiatives to ensure they are equipping their workforce with the right skills. Over 50 per cent are looking at reverse mentoring programmes, where younger employees share digital skills with older employees, as well as upskilling through training programmes (44 per cent) and apprenticeships (39 per cent).

When it came to the most important factor for realising their digital strategy, 37 per cent of retailers say having the right processes, attitudes and behaviours within the organisation is essential. Yet as a result of lacking the right technologies in the organisation, over two thirds say that shadow digital projects* are a serious problem (69 per cent). Over two thirds (68 per cent) say fear of failure is a serious hindrance to their organisation undertaking digital transformation.

According to Fujitsu, co-creation, specifically working on projects where you work closely alongside another organisation to deliver digital innovation, is a key component in digital transformation success; however, only 53 per cent of retailers are currently undertaking this kind of project. Only 58 per cent say that their organisation would be willing to share sensitive information as part of a co-creation partnership, while 53 per cent say a lack of success in a short timeframe would quickly put an end to strategic partnerships.

Retailers recognise the importance of new technologies such as Artificial Intelligence (AI) and the Internet of Things, with over nine in ten (95 percent) understanding that these technologies will impact the sector as a whole. Most (79 per cent) recognise that AI will transform the skills needed in their organisation by 2020.

Sahi continues: “Retailers cannot brush off the impact digital disruption is having and is going to have on their business, as, when implemented with the right strategy, there can be significant rewards. Retailers themselves are not inherently digital experts and innovators; they need external expertise to help them realise their digital vision and bring it to life. Making the most of digital requires more than just the latest tools. Retailers need the right skills, processes and partnerships to ensure that the technology they are implementing has the right people and strategy behind it to see success.”