Brazilian beer Skol is the most valuable brand in Latin America for the second year running, but there has been a 22% decline in total brand value since 2015, according to new research. The fifth annual BrandZ Top 50 Most Valuable Latin American Brands from WPP and Kantar Millward Brown, showed that beer brands dominate […]

Brazilian beer Skol is the most valuable brand in Latin America for the second year running, but there has been a 22% decline in total brand value since 2015, according to new research. The fifth annual BrandZ Top 50 Most Valuable Latin American Brands from WPP and Kantar Millward Brown, showed that beer brands dominate the list in the region.
Key findings:
• Retail sector grows contribution to the total value of Latin American brands to 20%
• Beer brands Tecate and Sol are the fastest risers, both increasing 31% in value
• Innovation to become more customer-centric, key to sustaining and growing brand value
• Economic and political uncertainty leads to 22% decline in total brand value since 2015
• Skol retains the No 1 spot worth $7.8bn
The report also shows that, in a challenging economic and political environment, the retail sector was the only category that did not decline in value, growing its contribution to the total value of the region’s brands from 16% in the previous report to 20% in 2017.
Latin America saw major political changes and high inflation that hit consumers’ budgets and confidence in 2016, resulting in a 22% decrease in the total value of the region’s strongest brands. However, the value of the Top 10 declined by just 14%, indicating that investment in marketing and building a strong brand can provide protection in tough times.
The downward turn was largely driven by banking brands, which as a category has declined 56% in value since 2015. This was a consequence of an increased perception of risk that affected both exchange rates and stock market valuations.
FMCG brands (the beer, food and personal care categories) continue to play the most important role in the BrandZ™ Top 50 LatAm ranking, contributing 42% of the total brand value in 2017 (35% in 2015). This indicates that householders are still buying their favorite brands, albeit less often.
The retail sector was static at USD$20.96 billion but, as a consequence of the decline in value of other categories, retail brands made up an increased proportion of the region’s most valuable brands. The third and fourth fastest growing brands in the overall Top 50 were retail brands Liverpool (no.10; 28%) and Bodega Aurrera (no.7; 16%) both of which broke into the Top 10 for the first time. Key to their success was their ability to be more innovative in attracting consumers and encouraging long-term loyalty in the face of increasing competition.
Beer dominates the Top 10, with five brands (four owned by AB InBev) holding a combined value of USD$26 billion; 25% of the ranking’s total value. Skol retains its position as Latin America’s most valuable brand, having demonstrated clear purpose to its audience with participation at events such as music festivals, and innovation in communications, packaging and products. The category declined 2% overall, but the impact was softened by beer brands in Mexico, where the younger generation has expanded and access to credit is growing. The fastest risers in this year’s Top 50 were Mexican beer brands Tecate (no.26) and Sol (no.33), which both grew 31%.
The BrandZ™ Top 10 Most Valuable Latin American Brands 2017 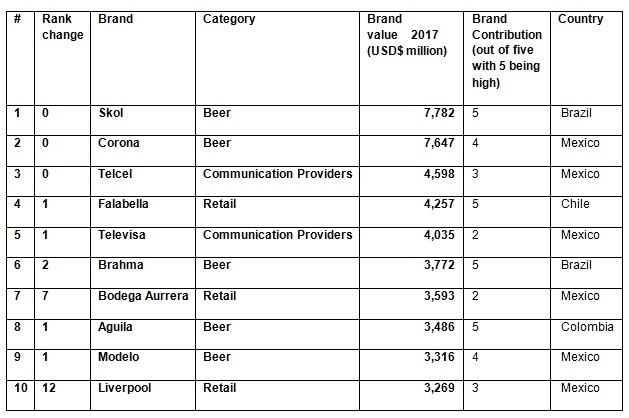 Looking at the contribution of each market within the region, Mexican brands once again lead the ranking with strong performances from Tecate, Sol, Liverpool, Bodega Aurrerá and Bimbo growing the country’s share of total value to 43%, up from 37% last year. Despite being the largest economy in Latin America, continued instability in Brazil has meant that its brands contribute 23% of the total value, down 1% from 2015. Chile has a 17% share and Colombia an 8% share. Brands from Peru (which contributed 4% of the ranking’s value) declined 12% in value in the last year, but there have been huge variations in their performances with some showing double-digit declines while others grew their value more than 50%.
“Arguably a company’s most important asset, a strong brand demonstrates a clear purpose which transcends functional benefits and is shared by every stakeholder,” explained Eduardo Tomiya, CEO Kantar Vermeer, Latin America. “Purpose-oriented brands generate higher shareholder value than their competitors. This is where beer brands, such as Skol and Corona for example, as well as retail and communication brands excel – combining local strength with attributes such as innovation, a superior customer experience and a clear value proposition.”
Other key trends identified in the BrandZ LatAm Top 50 study include:
· There were eight new entries in the Top 50 this year: Maseca (no.32), Sol (no.33), Tottus (no.43), Macro (no.46), Cielo (no.47), Tigo (no.48), Petrobras (no.49) and Parque Arauco (no.50). The shake up in the financial institutions category made room for Argentinean private bank Macro (USD$741 million) and Brazilian credit card Cielo (USD$734 million).
· Digital disruption is the catalyst for customer-centricity. Greater access to the Internet of Things (IoT), combined with rising smartphone penetration, enables companies to be more innovative in the ways in which they stay in touch with consumers, thereby creating more meaningful and timely connections with them. Most local brands however, in particular financial institutions, have yet to adapt and innovate the ways they think and act.
· Trust is increasingly important to consumers. When conditions are unstable consumers seek brands that are open and honest with them, and deliver what they promise.
· Successful retail players are personalizing the customer experience. Brands such as Liverpool or Bodega Aurrerá in Mexico have been successful in tailoring their offer to customers’ needs, for example with a variety of store sizes, stronger emphasis on value for money and the convenience of shopping from home.
“Tough times call for brands to ask themselves tough questions and make difficult decisions on their marketing investments and business actions. Formulating an effective strategy that balances quality, differentiation, relevance and cost requires a granular understanding about how the brand is perceived and what will resonate with the consumer,” commented Gabriel Castellanos, CEO, Hispanic LatAm, Kantar.
David Roth, CEO The Store WPP EMEA and Asia, said: “Even in difficult times brands can maintain and grow their value. Latin Americans are still buying their favourite brands, but shopping more carefully. Price and quality are important, but must be reinforced with a brand promise to deliver emotional benefit, achieved through uniting digital technology, consumer data and brand creativity.”
To download a copy of The BrandZ™ Top 50 Most Valuable Latin American Brands 2017 report, charts and photography, visit: www.brandz.com . The mobile app can be downloaded via www.brandz.com/mobile.
www.millwardbrown.com
www.wpp.com