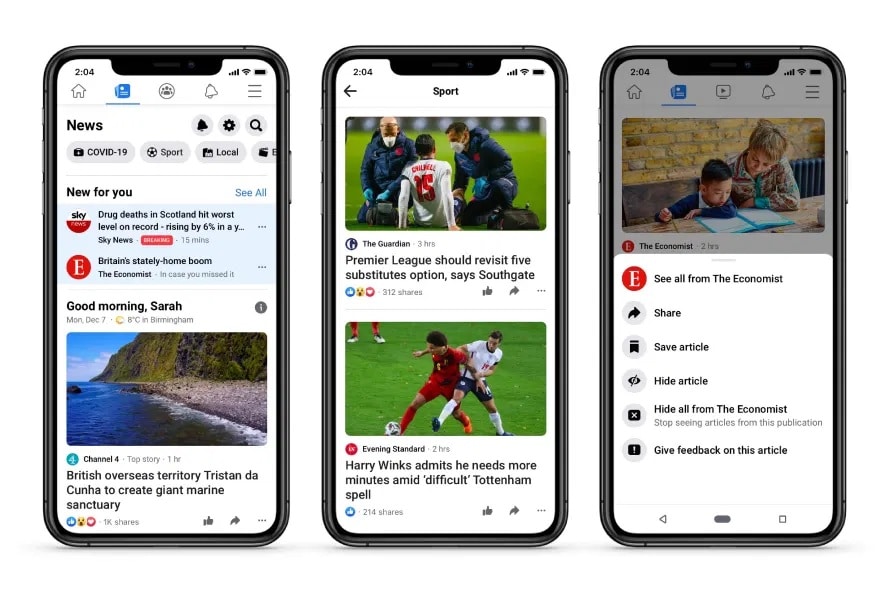 Facebook has launched its new curated news portal in the UK, marking the social media giant’s first market outside of the US.

Facebook news can be accessed through a tab in the Android or iOS app menu.

A number of ‘lifestyle titles GQ, Cosmopolitan, Glamour, Vogue and others were also announced in an earlier list of partners last year.

The deal aims to address some of the concerns that Facebook and Google are forcing many news publishers out of business.

The plan has been reported as likely to bring in millions of pounds for the largest organisations who have signed licenses allowing Facebook to display their headlines and previews of their articles.

These licenses stand in contrast to the headlines and article previews visible on Google Search, which has been criticised for replicating news publications’ work without paying them – to the point that the service has been banned in Spain, and is facing action in Australia.

Not all publishers have signed up-front deals with the company and some will benefit from the boost to traffic that Facebook will provide them, or from advertisements placed in Facebook’s Instant Articles feature.

Facebook’s move follows a review commissioned by the government and published in February 2019 that found Facebook and Google had a detrimental impact on British news media because they captured so much of the share of online advertising revenue.

Karl Weaver, Future Strategy Club member and former CEO of UK Data at the Publicis Groupe, comments on Facebook News and data security, said: “Data is one of the most precious commodities that firms can access. Data can generate incredible commercial insights, and the launch of Facebook News will provide news publishers a much needed boost. Although this highlights the rise of personalised content in the future, it poses risks around echo chambers and radicalisation.

Consumer trust needs to remain for Facebook News to work. There is often an assumption that consumers will happily exchange information with a brand, but the nature and relationship in that exchange is becoming more important. People are becoming more and more aware of data security, and with tech giants under increasing scrutiny of the way their data is used, brands such as Facebook will need to think more about how they build trust in this space.”