TikTok to capture 10% of UK social media traffic this year 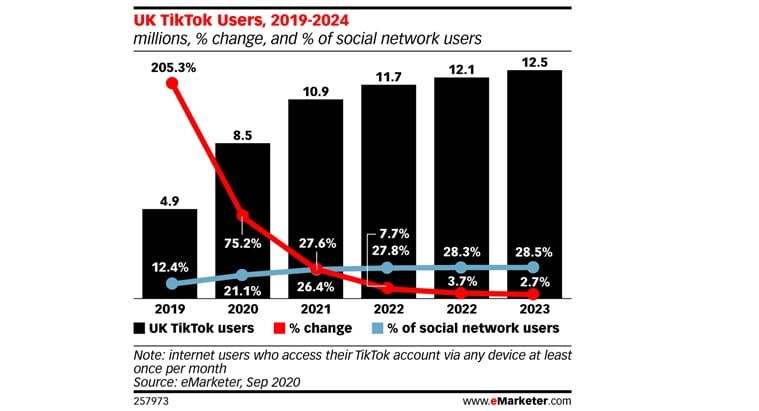 Video sharing app TikTok is forecast to capture more than 10% of social network users for the first time this year and surpass 10 million users by next year, according to a new report.

TikTok’s future may be uncertain in the US, but its UK operations continue to grow robustly despite security concerns. According to Emarketers latest UK social network forecast, the Chinese-owned video platform will have several milestone moments this year and next.

TikTok will grow its UK user base by 75.2% this year, reaching 8.5 million users, after triple-digit growth last year. Both 2020 and 2021 will be years of notable firsts: Usage will exceed 10% (12.7%) of the UK population this year, and total users will surpass 10 million next year.

“Due to the pandemic, kids and teens are spending more time at home and are eager to connect with friends, which has further propelled TikTok’s popularity,” said Rini Mukhopadhyay, eMarketer forecasting analyst at Insider Intelligence. “Users are flocking to the platform because it’s easy to use, and its short-video format effectively captures and retains the interest of the audience—particularly those in the 18-to-24 cohort. Many social media influencers have leveraged this popularity to build larger audiences, further attracting users to the app.”

TikTok’s share of social network users in the UK will also jump significantly this year to 21.1%, up from 12.4% in 2019. However, regardless of the app’s strong growth across metrics, controversy still looms.

“TikTok’s continued success in the UK is predicated on the platform steering clear of political interference,” said Bill Fisher, eMarketer senior analyst at Insider Intelligence. “Though TikTok isn’t facing quite as much hostility as it is in the US, there’s still a rocky road ahead. The company had wanted to move its international headquarters to London, for example, but that faced opposition from within the ruling party. And though a blanket ban on the app looks unlikely, such negative connotations could negatively impact its image in the UK.”