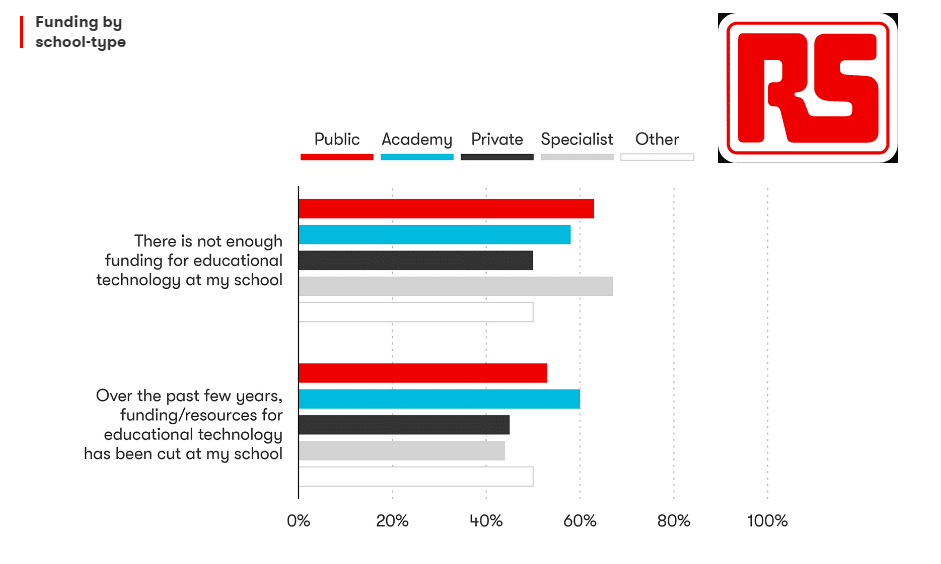 Over a third of UK teaches have spent £40 each on education technology supplies due to cuts, according to new research.

EdTech systems have become essential tools for teachers around the world, with many companies also offering their platforms for free during this period.

RS Components has surveyed teachers across the UK to get their views on educational technology, its impact on everyday learning and whether their schools are investing enough. The full ‘State of EdTech’ report can be found here.

Although there are plans for a £10 million UK government strategy for EdTech in schools, there is still a lack of understanding when it comes to educational technology among teachers. With more than 1 in 10 (14%) teachers admitting they’ve never heard of EdTech and over half (54%) of public school teachers saying there is a lack of training available, many teachers are struggling to adapt to this new way of learning.

• More than 1 in 10 (14%) teachers have never heard of EdTech with a further 36% saying they have heard of it but don’t know what it is. As a result, teachers may be struggling to adapt to this new way of learning, leaving schools at risk of investing thousands of pounds into EdTech that fails to provide additional value.

• 60% of academy teachers said that funding and resources for EdTech has been cut at their school over the last few years, despite the additional autonomy that academies have over their finances. Academies are also where the largest knowledge gap exists, with 3 in 5 teachers (60%) saying they don’t believe there is enough training available, with a similar scenario being experienced by teachers at public schools.

• 37% of teachers have spent £40 (on average) on supplies for students in order to fill the gap left by lack of funding, with over half (54%) of all teachers revealing that funding and resources for EdTech has been cut at their school. As a result, teachers may be left without the right resources to teach, meaning their pupils may be missing out on vital education.

• Music, Design & Technology and Information Technology (IT) are the subjects where EdTech funding is lacking most. The subjects where the gap is being plugged often rely on EdTech to be taught effectively, whether an app to assist learning or a piece of equipment. As a result, this is creating additional pressure for teachers to provide some of this funding themselves.

• The UK EdTech sector is expected to reach £3.4 billion by 2021, but areas of the UK are falling behind, with Northern Ireland having the least access to EdTech. The findings reveal that 3 in 4 (75%) of teachers in Northern Ireland said the children they teach don’t have enough access to EdTech, with the North East, West Midlands and Greater London also struggling.

• Despite the lack of funding, our findings show that almost 4 in 5 (79%) of teachers are now using technology in almost every lesson. Aside from the traditional pencils, pens and ruler, technology is now commonplace in the classroom, with over half of all teachers (56%) citing that they have seen improved learning apps and desktop computers (54%) over the past three years.