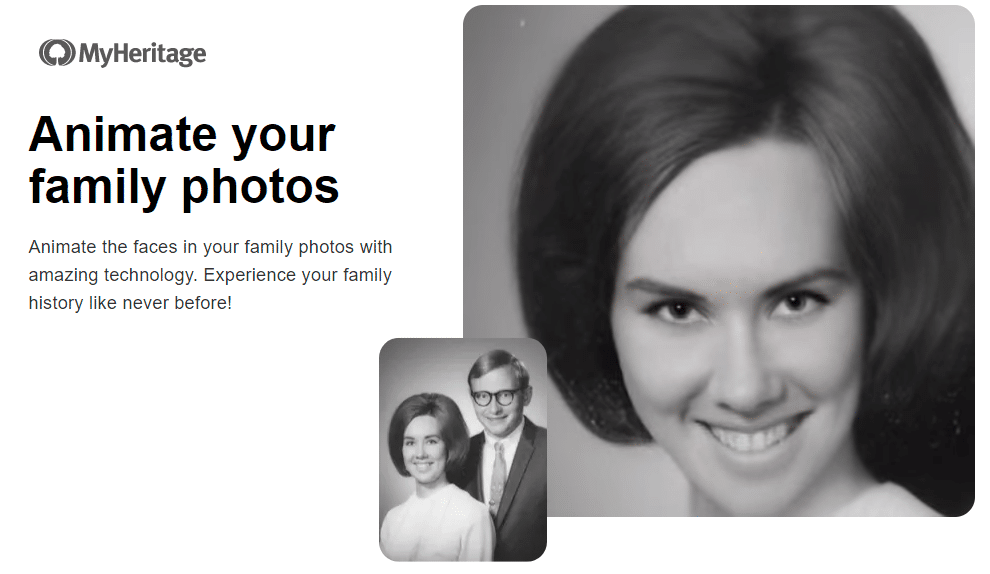 Genealogy service MyHeritage has launched a Deep Nostalgia" feature to bring the past to life, make it appear as though individuals in old photos are looking around, blinking, and even smiling.

The results are startlingly lifelike, as we see people moving their heads around, blinking, and even slightly changing expressions.

The short video clips are also great business for MyHeritage. Users have shared their Deep Nostalgia results across social channels.

MyHeritage said that it had deliberately not included speech in the feature “in order to prevent abuse, such as the creation of deepfake videos of living people”.

“This feature is intended for nostalgic use, that is, to bring beloved ancestors back to life,” it wrote in its FAQs about the new technology.

But it also acknowledged that “some people love the Deep Nostalgia feature and consider it magical, while others find it creepy and dislike it”.

“The results can be controversial, and it’s hard to stay indifferent to this technology.”

The technology behind Deep Nostalgia was developed by Israeli firm D-ID. It used artificial intelligence and trained its algorithms on pre-recorded videos of living people moving their faces and gesturing.

On the MyHeritage site, historical figures such as Queen Victoria and Florence Nightingale are reanimated. And earlier this month, to mark his birthday, the firm put a video of Abraham Lincoln on YouTube using the technology. The former US president appears in colour and is shown speaking.

People have begun posting their own reanimated ancestor videos on Twitter, with mixed responses.

Somehow these are so much more convincing than the Dickens in Assassin's Creed: Syndicate was. pic.twitter.com/VrNCB4u3PE

An even paintings can be brought to life:

NOOOO NOOOOO!
What have I done?
I'm going to hell for this.
She will haunt me in my nightmares.https://t.co/koSs9cGOaP pic.twitter.com/RgU0b31XBl

Some described the results as “amazing” and “emotional” while others expressed concern.

The move comes as the UK government considers legislation on deepfake technology.

The Law Commission is considering proposals to make it illegal to created deepfake videos without consent.

In December, Channel 4 created a deepfake Queen who delivered an alternative Christmas message, as part of a warning about how the technology could be used to spread fake news.

People can use the animated photo service for free at MyHeritage, but need to sign up with an email address and agree to the company’s terms and conditions as well as its privacy policy.

View the presentation below: