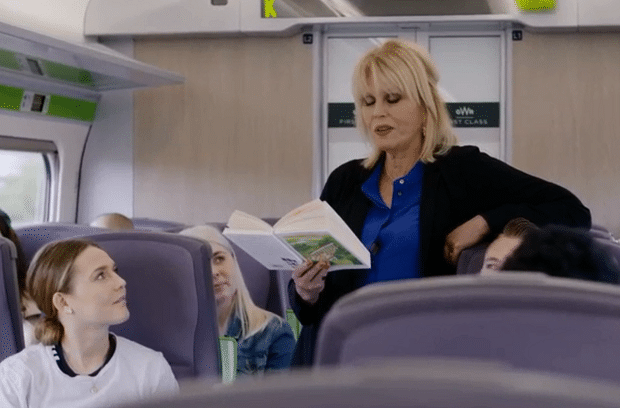 Fuze Tea, a new iced tea brand, has launched ‘Calm the Commute’ – a series of unexpected moments for Londoners on their commute home over the next few weeks.

Owned by The Coca-Cola Company, the new brand helps busy people enjoy a ‘me-time’ moment thanks to its ingredients which include chamomile and hibiscus. As such, Fuze Tea is calling on the British public to take some time out of their day to enjoy some much-needed relaxation on their journey home.

To launch the campaign actor Joanna Lumley hopped on board Great Western Railway’s busy commuter line from Paddington to Swindon and encouraged passengers to switch off by treating them to an impromptu book reading.

The campaign is supported by an OOH advertising campaign as well as VOD, mobile advertising and digital and social content across Facebook and Instagram. These elements will focus on the unique fusion of ingredients and how consumers can enhance their ‘me-time’ with Fuze Tea.

The OOH will be concentrated around commuter hubs such as key rail stations and bus stops via 6 sheets, transvision screens, ticket gateways and bus T-sides, and there will be mobile geo-targeting to target commuters on their journey home. Furthermore, geo-targeting digital OOH at commuter hubs will ensure reaching the target audience at the right time.

To amplify the activity, experiential sampling will also be taking place across the country to encourage the public to take a little more ‘me-time’. The experiential activation will see 0.4million samples shared at congested commuting hotspots such as Waterloo and Brighton stations. To further support office workers, Fuze Tea is Fuze Tea, a new iced tea brand, has launched ‘Calm the Commute’ – a series of unexpected moments for Londoners on their commute home over the next few weeks.dropping samples to businesses through Gems at Work, including money off coupons for their next Fuze Tea.

Christina Lecky, Senior Brand Manager at Coca-Cola GB: “Fuze Tea brings something new and different and, most importantly delicious, to busy Brits. Our research found that 44% of Brits feel they rarely get any me-time but if they do, it’s most likely to be at 17:05. We are encouraging people to switch off as they commute home and there’s nobody better than national treasure, Joanna Lumley, to surprise and help relax those commuting home with a book reading of her favourite novel. This however, is just the start, so keep an eye out while you commute home as we have more exciting things to come.”

A national poll from Fuze Tea has revealed that four in ten (44%) Brits feel they rarely get any me-time with moments lasting for a maximum of 55 minutes, the least amount of time throughout Europe.
Some of the factors found to put pressure and decrease the amount of me-time Brits get included the pressures of modern life (46%), life admin and queuing. The research revealed Brits spend a whopping 34 minutes a day queuing; that’s approximately 16 hours a month.