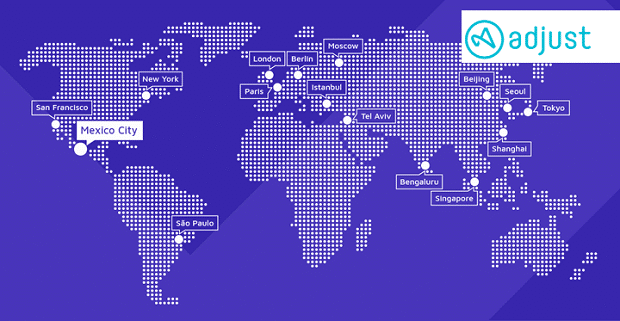 Mobile measurement and fraud prevention firm Adjust is expanding operations in Latin America, with the opening of an office in Mexico City.

The new location comes at a time when Latin America’s mobile advertising industry is experiencing remarkable growth. The Mobile Ecosystem Forum states that the Mexican mobile market is the second-largest in LATAM after Brazil, and Adjust data shows that LATAM as a whole is the second fastest-growing mobile market in the world after Asia Pacific.

“Mobile penetration in Mexico is poised to grow exponentially over the next few years, presenting attractive opportunities to invest in the market and help app marketers there unify and safeguard their advertising efforts,” said Christian Henschel, co-founder and CEO of Adjust. “With its burgeoning tech scene, Mexico City was a natural fit for us to build on our success in São Paulo and use the funding we received this year to foster global expansion.”

Adjust has had a presence in São Paulo since 2016, where Ricardo Feldman, Sales Director LATAM, is responsible for growing Adjust’s client base and revenue in South America. Today, the company tracks thousands of apps in LATAM overall — with more than three-quarters of them being used in Mexico. Adjust’s clients in LATAM include e-commerce website Dafiti and fintech industry leader Itaú.

Abril Bautista has joined the LATAM sales leadership team and will be focused on spearheading growth in the Mexican, Colombian, Chilean and Central American markets as Sales Director LATAM. Since joining the company in 2016, Bautista has had a pivotal role in expanding Adjust’s market leadership in the European and LATAM markets. Prior to joining Adjust, Bautista worked at German multinational software corporation SAP, where she focused on growing the business in South America.

“As a Mexican mobile marketing industry leader, I am excited to help Adjust grow along with and train the market in Mexico,” Bautista said. “We have incredibly talented sales, account management, and client success teams who are eager to help our clients succeed by offering personalized support and ongoing education in their native language.”

In total, Adjust has 16 international offices with more than 400 employees. The company plans to grow its global headcount significantly in 2020, including roles in Mexico City.