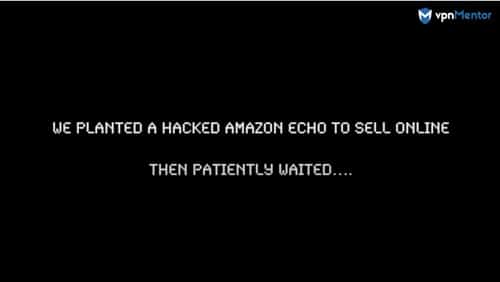 As one of the most dominant smart devices on the market, do we really know what, and who, we're welcoming into our homes when purchasing a secondhand Amazon Echo? In this video, online security experts vpnMentor investigated the accessibility of Amazon Echo by hacking into one unsuspecting family’s device - highlighting how easily it could be tampered with.

127 million smart home units are expected to be sold in the US in 2018, with the global smart home market expected to be worth $53.45 billion by 2022. With 55% of smart device owners in the dark about how they actually work, could those who bought second-hand smart home devices be welcoming a threat to their families into their homes?

vpnMentor have produced a video which shows just how you’re inviting hackers into your home, and how easy it can be for them to access your sensitive information. Disturbingly, the team were able to manipulate all of the devices tested to gain access to your home.

Our research revealed a critical vulnerability related to the first-generation Echo’s physical design. Hackers were able to open the device up and manipulate it using a specially crafted SD card. This means that malicious actors could live stream audio from its microphone, and remotely use its services.

With such terrifying findings, vpnMentor wants to highlight just how simple it is for your home to be targeted by malicious hackers.

However, the experts at vpnMentor have compiled a list of recommendations to protect users from becoming an easy target:

Ariel Hochstadt, co-founder of vpnMentor, commented: “If you are going to introduce smart technology into your home, it is important that you remain attentive with your devices to ensure that only those you trust have access. By following our set of simple rules you can ensure the best security practices have been met and saving you from becoming an easy target for crime.”

You can also watch their video investigation here to see how one unsuspecting family was affected after their devices were hacked.

All devices mentioned were purchased and hacked by a team of ethical hackers in March-April 2018. Full details can be found in the whitepaper. Although all hacks took place in real-life, the scenes depicted in the video are a reconstruction of a scenario that would have been possible with the vulnerabilities uncovered.