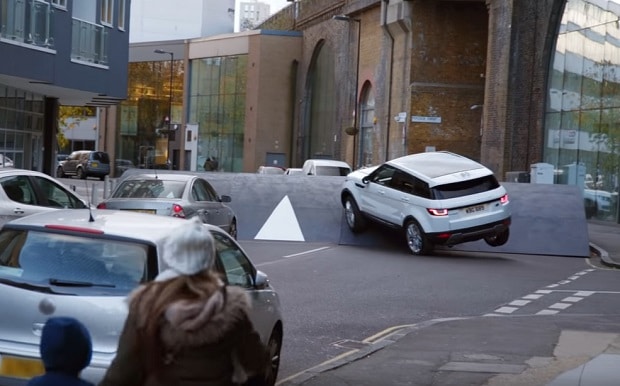 Range Rover decided to do a public demonstration of what their Evoque 4×4 can achieve, by setting up “the world’s biggest speed bump” in the middle of a London street.

Confused motorists pull up to the enormous obstacle and either turn around, try to fit around it, or in one case just drive straight into it. Range Rover wait until there’s a bit of a queue forming before casually breezing over it in the Evoque, while passers by look on in amazement.

Released on the brand’s social channels, the video clip from agency Spark44 has amassed more than 16m views on YouTube since its release right at the end of 2017.

Brian Fraser, chief creative officer at Spark44, said: “Every driver hates speed bumps. So what better way to demonstrate the capability of our most city-focused vehicle, the Range Rover Evoque, than to pit it against the biggest speed bump anyone has ever seen?”

Range Rover’s advert is a crystal-clear example of absolutely nailing the single-minded proposition. “Born in the wild, adapted to the city” perfectly brings together Range Rover’s audiences – those that work in the city then play in the country.